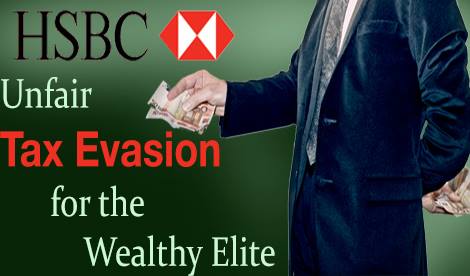 The Swiss subsidiary of HSBC Holdings plc has admitted to helping its wealthy customers evade taxes and hide millions of dollars in assets. Who are these wealthy customers receiving special and illegal treatment? The client list runs the gamut from royalty such as Morocco’s King Mohammed, politicians, corporate executives, arms dealers, professional soccer and tennis players and, of course, the Hollywood elite.

How Did These Failures Slip Past the Legal Radar?

After its purchase in 1999, the Swiss arm of the banking giant had not been fully integrated into HSBC, which allowed significantly lower standards of compliance and operation.

Douglas Flint, the finance director at the time HSBC who took over the Swiss subsidiary, refused to be held accountable for the failures, saying, “The individuals that I think are most accountable both for the data theft and the weakness that allowed that to happen, and for the behavior that was unacceptable in relation to our standards, were the management on the ground in Switzerland.”

Who Blew the Whistle?

Hervé Falciani was a systems engineer for HSBC’s Swiss private bank back in 2009 and delivered a list of over 100,000 client names to the former French Finance Minister, Christine Lagarde. During that time, the Greek financial crisis was brewing and Athens had recently announced its budget deficit was more massive and threatening than they had initially thought. In an effort to help, Lagarde sent the Greek client names on the list to government officials in Athens so they could tackle the huge tax evasion issue. Lagarde has additionally decided to share the list with the governments of countries such as the U.S., Argentina and Belgium.

Why Should You Care?

Forget the fact that tax evasion is illegal. While many nations around the world, including the United States, are facing an economic crisis, the wealthy elite have not been paying their fair share into the system, forcing governments to hit up ordinary citizens for more cash to help put these financial fires out.

Is this fair? Nope. Is this anything new? Nope.