Now reading: How to know if you’re eating pesticides

What are Those PLU Codes Saying About Your Produce?

Admit it. You’ve found yourself standing in your kitchen, mumbling a string of profanities under your breath when you couldn’t get one of those darn PLU stickers off your Red Delicious apple. As much of a pain in the a** as those stickers can be, they are actually very helpful. They can help you make healthy shopping choices and keep you away from nasty chemicals that find their way into our foods.

The codes on those PLU stickers do more than expedite your checkout process by telling the cashier exactly what you’re buying; they also describe how that produce was grown. Wouldn’t you want to know whether you are about to eat fungicides, herbicides and other harmful toxins? Or whether your food was grown organically or if it had been genetically modified?

You’ll notice that some PLU codes have only 4 numbers. This code means the produce was grown conventionally using pesticides. As an example, in the U.S., all bananas are labeled with the PLU code 4011. Because this code has 4 numbers, you know some type(s) of chemicals were used in the process of growing the banana. 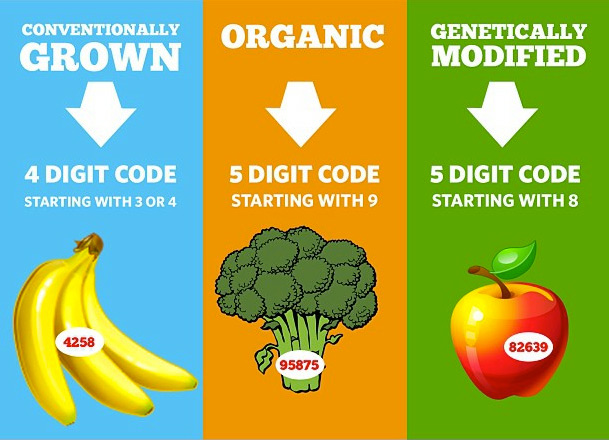 The stickers on your fruits and vegetables tell you about pesticide use and other vital information!

5 Numbers That Start with a 9 – Organic

This is the produce all of us should be buying (in a perfect world) because this PLU code signifies that the produce was grown organically and not genetically modified in any way. So, going back to our banana example – an organic banana’s PLU code would read 94011. Don’t just trust the big sign that says ORGANIC in your grocery store, check the stickers yourself and know what you’re buying.

This is where things start to get a little tricky. Now, theoretically a 5 digit PLU code that begins with the number 8 means that the produce has been genetically modified (GMO). You want to stay as FAR AWAY from these fruits and veggies as possible. So our genetically modified banana would have the PLU code 84011.

Here’s the thing though – supplying these codes is purely optional – so while there is technically a code for GMO foods, no one really uses it because they know consumers will never buy these foods. So what are we supposed to do? Stick to organic produce (94011) as much as your budget will allow. If the code has a 9 – remember that is good, you want that.

As far as we know, the only GMO foods in this country currently are Hawaiian papayas, some zucchini, yellow squash, and corn on the cob, so if you buy these and they aren’t organic, you may be buying genetically modified foods.

Sure those stickers can be annoying at times, but they’re there for a reason so protect yourself and your family from harmful chemicals and read those codes!