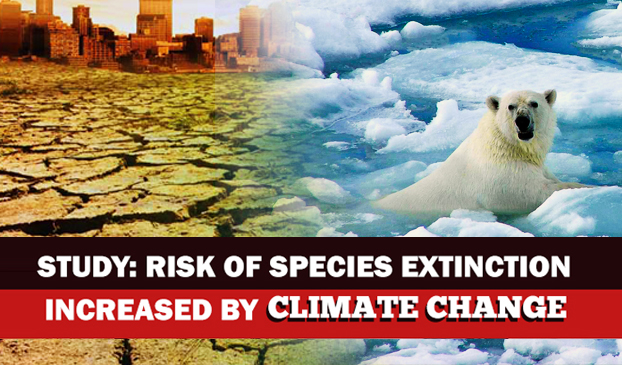 Scientists expect the Earth’s temperature to rise by 2ºC

One of every six species currently on Earth faces an increased risk of extinction because of climate change. This is according to a study published on May 1, 2015 in the academic journal Science. According to this study, the rate of extinction globally will increase to 5.2 percent with a 2˚C rise in temperature. A 2˚C rise in temperature is the internationally agreed upon goal, meaning that climate professionals are hoping that global temperatures will only rise 2˚C. However, the feeling among many scientists is that this goal is simply unattainable. There’s expected to be a much higher rise in global temperatures.

The findings of this study, authored by Dr, Mark C. Urban, say that if things go as expected, then approximately 16 percent of species on Earth will be threatened by extinction. That’s the global average, but due to geographic differences, each continent will be affected differently. New Zealand will have the highest risk of species extinction at 23 percent while Europe will have the lowest risk of animals facing extinction at six percent.

The study also found that animals that live only in specific regions will face a higher risk of extinction compared to those species that can be found in various regions. This is because climate change affects species’ habitats, and such species will likely be unable to survive in different habitats.

Even species that won’t be facing extinction will be negatively affected. This is because it is expected that climate change will cause significant changes in species’ habitats, distributions and interactions. Animals facing extinction are expected to move into newly suitable habitats and compete with species already inhabiting that area.

Climate change is a serious matter

Increase in global temperatures not only increases the risk for animals facing extinction, but actually accelerates it. It is important to act now to limit future climate change to save these endangered species facing extinction before it is too late.