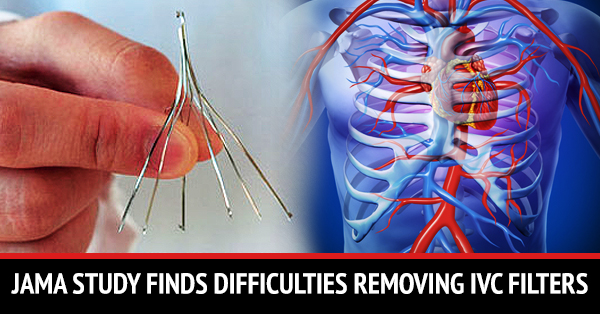 A study published in the Journal of the American Medical Association found that nearly 20 percent of IVC filters were unsuccessfully removed.

The medical device, meant to be removed when a patient’s risk has subsided, is an attempt to avoid potential long-term problems caused by permanent filters.

However, researchers have discovered that IVC filters are not always removable. Recent data illustrates that unretrieved IVC filters may come with a variety of additional complications.

Details of the Study

In April 2013, the Journal of the American Medical Association published a study that tested the safety of retrievable vena cava filters. The research focused on making conclusions about “complications, follow-up data, date of IVC filter retrieval, and use of anticoagulant therapy.”

Of the 679 retrievable IVC filters that were placed, 58 were successfully removed. However, nearly 20 percent of attempts were unsuccessful. Researchers concluded that “unretrieved removable IVC filters may carry significant long-term risks.”

Additionally, the team cited 10 serious filter-related complications stemming from the lack of removal. These painful complexities required patients to be admitted to the hospital, sometimes for an extended period of time.

Examples of these issues  included a 33-year-old man with a fractured IVC filter that lodged in a pulmonary artery and a 56-year-old man who experienced filter perforation that caused abdominal bleeding.

“The Food and Drug Administration recommends that IVC filters should be removed as soon as the risk of PE has subsided,” according to the study.

Patients who experienced complications with IVC filters should complete a no-obligation survey to find out if they are eligible for legal compensation.