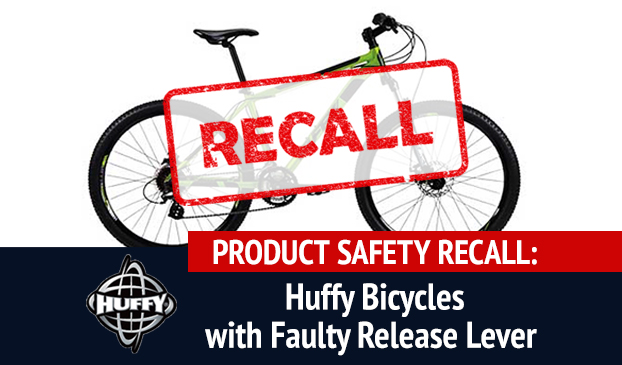 Huffy is recalling about 460 bikes due to a faulty quick release lever that will increase the rider’s risk of injury.

Huffy Corporation, the maker of mass-market Road, Mountain and BMX Bicycles for both men and women, is recalling almost 500 bicycles in order to prevent brake-related injuries from occurring.

Riders may be injured or thrown from the bike if the open quick release lever on the bicycle’s front wheel hub came into contact with the front disc brake assembly. The front wheel may come to a sudden stop or separate from the bicycle, increasing the likelihood that the rider would crash. However, no accidents have been reported. Consumers can easily identify if the bike is included in the recall by inspecting the frame. The bicycle includes the model name on the back portion of the frame and the model number near the pedals.

However, any bikes with a green dot on the inside of the quick release lever are not included in the recall. The bikes were sold at Walmart, Sears Puerto Rico and The Northwest Company (Cost U Less) from September 2014 through May 2015 for a price ranging from $250 to $370.

The quick release lever must be replaced as soon as possible. If the lever has a green circular marking, it is not included in the recall.
Via: CPSC

Consumers should not use the bicycles. Contact Huffy for a replacement quick release lever free of charge.

Huffy encourages consumers who purchased the faulty bike models to contact the company toll-free at 888-366-3828, email at Service@Huffy.com or reach out online at www.huffybikes.com.