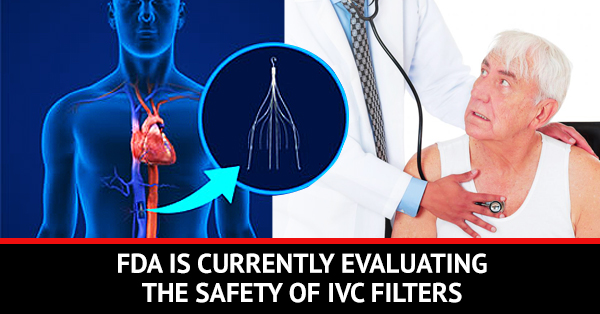 The FDA began receiving injury reports related to IVC filters in 2005, which prompted the regulatory agency to evaluate the overall safety of the devices.

An inferior vena cava filter, also known as an IVC filter, is a medical device implanted into an essential vein that carries blood to the heart.  The devices are used to prevent life-threatening blood clots from traveling through the body and blocking the lungs from functioning properly.

The growing popularity of IVC filters has come with a variety of complications, including device migration, filter fracture, movement of the filter or its pieces to the heart or lungs, perforation of the vessel, and a challenging removal.

After receiving hundreds of reports of these complications, the FDA has issued a safety announcement about the device and continues to assess the adverse effects it may cause.

All About IVC Filters

The inferior vena cava is a large vein that brings blood from the lower portion of the body to the right chamber of the heart.
Image: My School Lights

The inferior vena cava is a vein that transports blood from the lower body to the heart. The small cage-like device is implanted into the major blood vessel to stop blood clots from traveling to the lungs.

The device is often recommended for patients with an increased risk of a blood clot moving toward the lungs, a condition known as pulmonary embolism (PE).

In many cases, these patients are unable to utilize pharmaceutical anticoagulant medications. While the some of the “retrievable” devices may be removed, some IVC filters are marketed as a permanent way to prevent blood clots from migrating to major organs.

The FDA Raises Concerns Once Again

In some cases, it may be very difficult to retrieve IVC filters from the body.
Image: Phase One Medical

In 2010, the FDA released an initial communication informing the public about the potential dangers of IVC filters. The regulatory body cited the growing popularity of these devices, which increased from 2,000 IVC filters used in 1979 to almost 167,000 filters in 2007.

The FDA refers to a number of difficulties that may arise from IVC filter implantation. The organization is working to analyze these occurrences in order to distinguish the frequency of the complications.

“Since 2005, the FDA has received 921 device adverse event reports involving IVC filters, of which 328 involved device migration, 146 involved embolizations (detachment of device components), 70 involved perforations of the IVC, and 56 involved filter fracture,” according to the FDA’s report.

In 2014, the FDA released an updated communication on the subject of IVC filters. However, the organization will continue to collect additional data on both retrievable and permanent IVC filters.

The FDA urges physicians to closely supervise treatment with IVC filters and measure the risk/benefit profile of each patient.
Image: Health Tap

While an IVC filter can be very beneficial, it can also be dangerous. Doctors must closely monitor all patients using the device by following up to check the status of each individual.

The FDA recommends that physicians weigh the benefits and the risks of IVC filters. If a patient’s risk of pulmonary embolism has diminished, doctors should consider removing the device in order to prevent problems in the future.

The FDA urges doctors and patients to be aware of issues with “device migration, filter fracture, embolization (movement of the entire filter or fracture fragments to the heart or lungs), perforation of the IVC, and difficulty removing the device” and long-term risks such as “lower limb deep vein thrombosis and IVC occlusion.”

However, there are many patients who have already experienced complications from IVC filters. Complete a free, no-obligation case evaluation now to see if you qualify for compensation.