An Olympus duodenoscope that caused a superbug outbreak had been used to perform ERCP on patients for years without FDA approval.

Duodenoscopes are used in ERC procedures to treat cancers, gallstones and other digestive illnesses. The devices assist in performing ERCPs on more than 500,000 patients each year.

The Food and Drug Administration released a report in March informing doctors that certain scopes were sent to market without undergoing an evaluation. The model, recently identified as the cause of widespread bacterial infections, had been used for years without agency approval.

Although Olympus Corporation began selling duodenoscopes in 2010, each model was not individually approved by the FDA. The manufacturer claimed that the models weren’t submitted for careful examination because the design closely matched other products on the market.

But the Olympus TJF-Q180V actually differed from existing models. It was later discovered that the TJF-Q180V included a sealed channel that would be hard to fully disinfect when adhering to current cleaning standards.

In March 2014, the FDA delivered a letter compelling Olympus to apply for approval in order to sell the device. The agency subsequently issued a safety announcement to warn doctors and patients about the device’s potential to spread hidden bacteria. 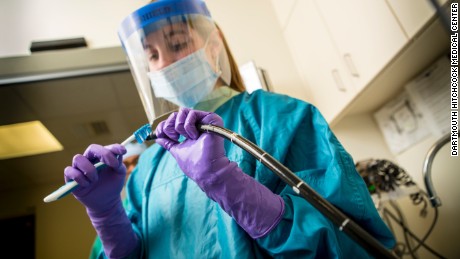 The FDA sent out an announcement that showed health professionals are unable to completely disinfect certain duodenoscope models.
Image: CNN

In March, the health department worked to track down 179 people that visited UCLA Medical Center and caught bacterial infections from dirty scopes between Oct. 2014 and Jan. 2015. The agency issued a safety alert to inform medical staff that cleaning “may not entirely eliminate” the risk of infection.

“Some parts of the scopes may be extremely difficult to access and effective cleaning of all areas of the duodenoscope may not be possible,” the FDA said. “Residual body fluids and organic debris may remain in these crevices after cleaning and disinfection.”

But UCLA isn’t the only hospital where contaminated scopes spread antibiotic-resistant infections. Eleven deaths at a hospital in Seattle, along with four infections at Cedars-Sinai Medical Center and 281 patients exposed to E.coli at Hartford Hospital proves that ineffective scope sanitation isn’t an isolated issue.

The FDA is working with the CDC and conducting “reviews of reprocessing validation data from each of the three manufacturers marketing duodenoscopes in the [U.S.] — FUJIFILM, Olympus and Pentax.”

The agency advised medical professionals to inform patients about the risk associated with scope procedures. However, individuals who had a medical procedure with a duodenoscopy and caught an infection might be eligible for legal assistance and compensation.

Take a short survey for a free, no-obligation case evaluation.