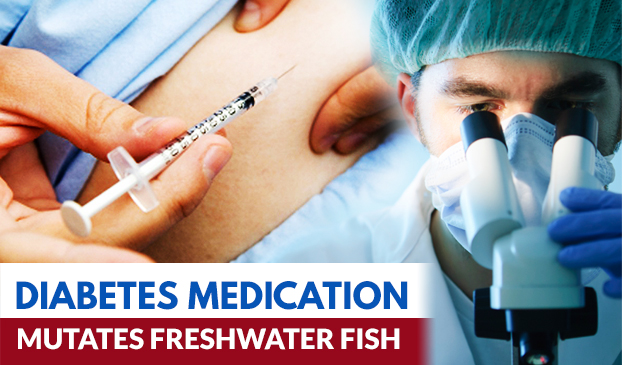 An unlikely culprit has mutated fish into becoming transgendered.

Scientists have discovered that transgendered fish in freshwater systems worldwide have been mutated by an unlikely culprit.

Studies show that these fish have been physically mutated by Metformin, an oral medication prescribed to regulate blood sugar in patients with type II diabetes.

Rebecca Klaper, a professor at the University of Wisconsin-Milwaukee School of Freshwater Sciences, studied the chemical contaminants in Lake Michigan, where she found the amount of metformin to be particularly prevalent.

According to her research, the fish exposed to metformin developed intersex structures, with the hormones for female egg reproduction occurring in males. Also, the exposed fish had a body size that was reportedly smaller than normal.

Intersex fish are commonly found downstream near wastewater treatment plants, where hormone-altering chemicals are prevalent. The mutated fish were exposed to a contaminant amount similar to what is found in wastewater effluent, or the “liquid waste or sewage discharged into a river or the sea.”

In this instance, the amount of metformin was more prominent than other chemicals found in the freshwater sample. Researchers found this unusual because metformin is primarily prescribed for diabetes care, not hormone-related conditions.

However, metformin has another use. It can be prescribed to women with polycystic ovary syndrome, which is a disease that causes enlarged ovaries with small cysts on the edges.

This means the drug could be an endocrine disruptor, which causes physical changes that can also affect the human body. Endocrine disruptors confuse the body’s complex hormone messaging system. They can cause cancer, behavioral issues, immune suppression, reproductive abnormalities, birth defects and other symptoms.

Klaper will focus on studying genome changes caused by the drug in order to better understand the intersex mutations in the fish. Scientists are continuing to investigate the negative effects that metformin could have on wildlife and the environment.

“We’re now working on a paper that investigates the metabolic pathways at various points in the fishes’ life to see what is changing with exposure,” Klaper said in an article from Science Daily.