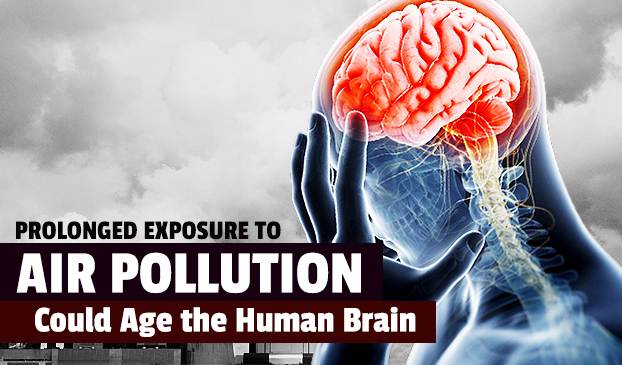 Air pollution could shrink the brain!

As humans age, the neurons in the brain begin to deteriorate and it shrinks in size. A new study illustrates that constant exposure to air pollution may decrease the volume of the brain just as aging does, leading to issues such as silent strokes and cognitive impairment.

The study, authored by Elissa H. Wilker, a researcher in the cardiovascular epidemiology research unit at Beth Israel Deaconess Medical Center in Boston, attempted to understand the link between air pollution and brain changes in older adults.

The team of researchers used magnetic resonance imaging (MRI) to examine the brain structures of 943 healthy adults who were at least 60 years old. The researchers then compared the findings with the amount of  fine-particle air pollution near the participant’s homes.

Fine-particle pollution, caused by car exhaust, industry and other sources, is common in an average city. The study found that 2 micrograms per cubic meter of fine-particle pollution was linked to a 0.32 percent reduction in brain volume. According to Wilker, this is equal to one year of brain aging.

When the brain ages, there is an increased risk of silent strokes, or lesions on the brain that indicate damage. In the same study, the researchers also found that 2 micrograms per cubic meter of fine-particle pollution led to a 46 percent increase in silent strokes. The study illustrates that brain shrinkage can also lead to cognitive impairment in the form of impaired mobility, memory problems and dementia.

Because this is the first study that measures the link between air pollution and brain changes in older adults, Wilker asserts that the findings are not yet certain. However, the team believes that the shrinkage is potentially due to inflammation, and will continue to investigate the matter.

For now, residents in areas with high amounts of air pollution should be aware of the potential changes taking place in their brain.