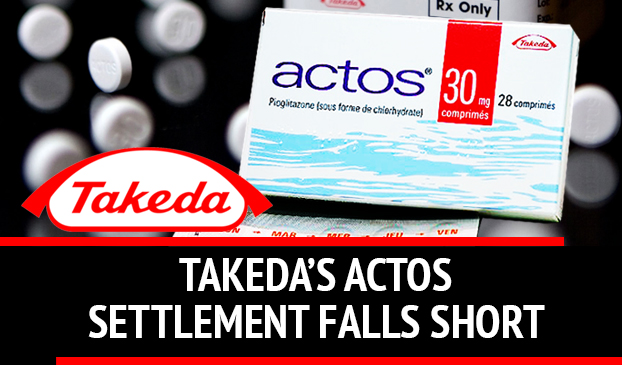 Japanese pharmaceutical giant Takeda is attempting to settle thousands of bladder cancer lawsuits. The company refuses to go through with payouts until 95 percent of plaintiffs sign on, but many are holding out in hopes of getting more compensation.

A $2.37 billion dollar deal to settle thousands of lawsuits related to Takeda’s cancer-causing diabetes drug Actos is in the works. But the settlement may not make it to the final stages if claimants continue to hold out for higher payouts.

Takeda Pharmaceutical Co.’s new CEO Christopher Weber made the $2.37 billion offer in hopes that enough claimants would sign on to close the case. But 20 percent of the desired 95 percent of claimants didn’t agreed to the deal by the initial deadline, which has sprouted doubts about the settlement, causing many to question if it will fall through.

The Backstory on Actos Actos is a popular Japanese-made diabetes drug that has been linked to bladder cancer.
Via: Japan Times

Takeda Pharmaceutical Co. is a Japanese pharmaceutical company and one of the largest pharmaceutical manufacturers in Asia. Takeda’s diabetes drug pioglitazone, known as Actos, was released in 1999. The drug has since generated more than $16 billion in sales.

In 2004, Actos conducted studies that linked the drug to bladder cancer. The company reportedly kept these findings a secret for seven years.

In 2011, Actos revenue was at an all-time high, ranking in at $4.5 billion. The drug generated 27 percent of Takeda’s income at the time, according to Bloomberg.

Takeda came finally forward about the studies, and the FDA issued an Actos FDA Bladder Cancer Warning on June 15, 2011.

Actos has reportedly caused cancer in thousands of patients, subjecting Takeda to five years of litigation. Takeda teamed up with Eli Lilly in marking efforts, which has made the pharmaceutical company partially liable in the settlement.

In addition to thousands of lawsuits, the FDA has ordered Takeda to obtain data on drug dose, duration of exposure and potential confounding factors that cause cancer. The study will include 193,099 patients with diabetes who do not already have bladder cancer.

“To address the long-term risk of bladder cancer associated with pioglitazone use, the drug manufacturer (Takeda) is conducting a ten-year, observational cohort study as well as a nested case-control study in patients with diabetes who are members of Kaiser Permanente Northern California (KPNC) health plan,” according to the FDA Bladder Cancer Warning.

“The FDA will continue to evaluate data received from the ongoing KPNC study. The Agency will also conduct a comprehensive review of the results from the French epidemiological study. FDA will update the public when additional information becomes available.”

Holding Out For Higher Payouts And Higher Acceptance Rates

Takeda’s lawyers are confident that 95 percent of plaintiffs will sign on by the extended deadline, which ends on September 11.
Via: 2heads

The average payout to each individual who developed cancer or another illness from taking Actos would be more than $250,000. The deadline for 95 percent of claimants to sign on and accept the settlement terms was August 12, but it passed with only 75 percent of plaintiffs on board.

Experts speculate that many of the individuals who developed cancer are aware of higher payouts awarded in previous trials, which has made the plaintiffs more likely to hold out on the deal.

Takeda is on a losing streak when these cases are taken to trial, with five loses out of nine. In Louisiana, a jury awarded $9 billion to a patient who reportedly developed bladder cancer after using Actos for 5 years. The award was reduced by 99 percent to $36.8 million in 2013, but that is still exponentially higher than what plaintiffs would receive in the settlement.

For this reason, some may be in favor of taking their chances suing Takeda. Others might refuse to settle on principle.

Either way, the deadline has been extended for an additional month and will be closed on September 11. The company is holding out on finalizing the deal until almost everyone is in agreement. Takeda’s lawyers appear to be confident that plaintiffs will sign on before the next deadline hits.

“The rate of participation in the resolution program at this point in the opt-in process is in line with other similar, successful resolution programs,” according to Kenneth Greisman, a lawyer representing Takeda.

In the meantime, jurors are being appointed to a trial in Las Vegas State Court. Cases are still pending in federal courts in Lafayette and Louisiana, and in state courts in Illinois, West Virginia, California and Pennsylvania.