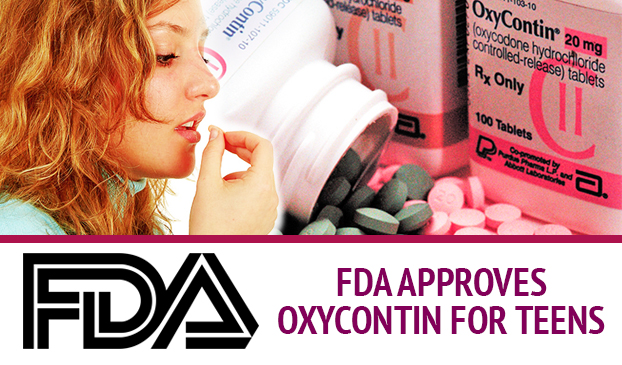 After receiving results from a commissioned study on how Oxycontin affects pediatric patients, the FDA approved the drug as a long-term pain management therapy.

Oxycontin, a frequently abused drug that relieves serious pain, has been approved for children and teens between the ages of 11 and 16 years old.

The FDA approved the drug after commissioning trials that focused on the 11 to 16 demographic to collect reliable data on how it affects a younger age group. The study, conducted by pharmaceutical manufacturer Perdue Pharma, provides necessary information about dosages and side effects of Oxycontin when used by younger patients suffering from cancer, traumas or other serious illnesses.

Oxycontin is a narcotic opioid painkiller that is similar to morphine.
Via: LA Times

Oxycontin is a powerful opioid that relieves severe pain. It is controversial because of its highly addictive properties. Oxycontin is a partly synthetic, narcotic analgesic drug that is a derivative of the opium poppy, which was used to treat pain throughout ancient times.

The drug acts on the nervous system by stimulating opioid receptors in the brain and spine. When the drug is taken, it causes a variety of reactions, from reliving severe pain to slowing the breathing and putting the user in a euphoric state.

Oxycontin is the extended-release version of the drug oxycodone. The drug is considered better for long-term pain management because it needs to be taken less frequently than other drugs in its class. Oxycontin is taken every 12 hours, whereas oxycodone is taken every 4-6 hours.

In addition, Oxycontin is a different substance. Its thicker casing makes it more difficult for abusers to crush or dissolve the pill in order to snort or inject it.

What Prompted Approval For The Demographic? The FDA approved the use of Oxycontin because of a lack of feasible pain management options for the 11 to 16 age demographic.
Via: Jennings Wire

The authorization was made because a lack of long-term, effective pain management therapies for pediatric patients. The FDA has approved the drug to eliminate the need for doctors to make educated guesses based on personal experiences.

Having doctors translate adult data to treat teens just wasn’t going to cut it for the FDA. The goal of the study was to provide sound information on how Oxycontin affects younger demographics. In 2012, Perdue Pharma conducted a pediatric trial in 150 children to test the drug.

Sharon Hertz, M.D., Director, Division of Anesthesia, Analgesia, and Addiction Products, commented on the study and its results. The study focuses on how Oxycontin moves through the body in pediatric patients.

“Pediatric patients don’t usually have the same kind of chronic pain conditions as adults, so patients in the study were prescribed OxyContin in situations where they were expected to require pain management with an opioid for many weeks – for example, after extensive trauma, or after major spinal surgery or other types of major surgery to correct of birth defects.

The studies supported the addition of a pediatric indication to the OxyContin label for patients 11 to 16 years old, and provided the much-needed data to health care providers.The new study data and resulting pediatric indication for OxyContin give doctors more specific information on how to safely manage pain in their pediatric patients following these types of surgery or traumas,” Hertz said.

The FDA believes that Oxycontin will be a great benefit to pediatric patients and fill a necessary gap in pain management.

“Fewer daily doses may free patients for physical therapy appointments, allow them to go home from the hospital sooner, and may help them to sleep through the night without waking up from pain. So from that perspective it’s very useful,” Hertz said.

Risks Involved With Opioid Use According to the Centers for Disease Control and Prevention, 44 people die from opioid overdose every day.
Via: Oxy-Addiction

Doctors usually prescribe opioids as post-operative pain relievers. But many patients who are prescribed these drugs become dependent on the effects, even after recovery is complete.

Opiates are classified as schedule II controlled substances because of high potential for abuse, which calls for stricter regulations. Oxycontin is a popular black market drug that often leads to heroin use. Nicknamed ‘hillbilly heroin,’ Oxycontin can at times be a less costly alternative that is similar enough to the street drug.

Critics argue that prescribing opiates to teens is dangerous because it could introduce them to a high that would prompt them to seek out drugs later in life. In addition, the caretaker needs to carefully monitor the dosage. If the wrong dosage is administered, the drug could be deadly.

The FDA Disclaimer And Projected Future

The FDA approval comes with warnings and precautions for pediatric patients using Oxycontin.
Via: Smart Tan

The FDA includes warnings for Oxycontin use as a treatment for children, which are the same as the general precautions for adults. In addition, the FDA regulates that the drug should only be used in pediatric patients who have been previously exposed to opiates.

Hertz said patients “must already be responding to, and tolerating a minimum opioid dose equal to at least 20 mg of oxycodone per day before they can be prescribed an equivalent dose of OxyContin.”

Hospital staff should be careful not administer the drug with other pharmaceuticals that will add to the sedating effects of Oxycontin. Hertz also comments on how caretakers and patients should store the drug if it has been prescribed for use outside of the hospital setting.

Click here to read the interview with FDA Director Sharon Hertz, which includes more information on how the drug should be used to treat the younger demographic.

It is impossible to predict if pediatric patients who use opiates as a pain management treatment will go on to abuse drugs later in life. For now, children and teens with severe and unmanageable pain will have an additional treatment option. And Hertz predicts expects there will be even more options in the future.

“Quite a few of the newer opioid drugs have pediatric studies underway to gather the data that will help prescribers use them safely,” Hertz said. “I expect that our teams will be working together a lot more in future to make sure that new pediatric pain management options continue to be safe for children in the U.S.”