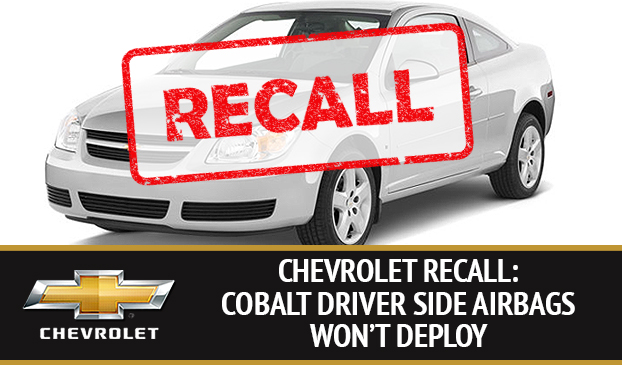 Chevy is recalling almost 60,000 Cobalt model cars because of defective wiring in the driver’s side door. The wiring won’t send the proper electrical signal to make the airbag deploy.

General Motors Company is recalling an estimated 60,000 Chevrolet Cobalt vehicles with defective airbag sensors. The side-door airbag wiring is improperly routed, which means the airbag may not deploy to protect the driver if a crash were to occur.

If the airbags don’t deploy, thousands of people could be in danger. The defective airbags put drivers at risk of increased injury and death.

The Reason For The Recall

The front driver side airbag may not deploy, which could put the driver at risk of injury or death.
Via: Nelson Mazda

General Motors is recalling all Chevy Cobalt cars manufactured during the six months in 2010 between January 4 and June 23. The recall was issued on August 10 with the id number 15075.

GM has been investigating the defective airbags since January 20, 2015. The investigator found that Side-Impact Sensor (SIS) harness in the 2010 vehicles was improperly routed in the driver side front door.

In march, the investigator found the service light meant to notify drivers of airbag issues was not illuminated. The roof-rail airbags were functional, but the improperly routed wiring in the driver side door could rub against and damage the SIS harness, which would cause an electrical short in the airbag sensor’s circuit.

If something were to strike the vehicle on the driver’s side, the impact would normally send an electrical message that would deploy the airbag. But with the defective wiring, the airbag wouldn’t receive the information it needed to initiate the airbag to deploy.

Chevy is offering to fix the airbag issue free of charge.
Via: All Car Brands List

The vehicle manufacturer will notify Chevy Cobalt owners and car dealerships that may be linked to the sale of the recalled vehicles beginning on August 26.

GM urges customers to have their vehicles checked out and repaired free of charge. Contact Chevrolet customer service at 1-800-222-1020 for more information.