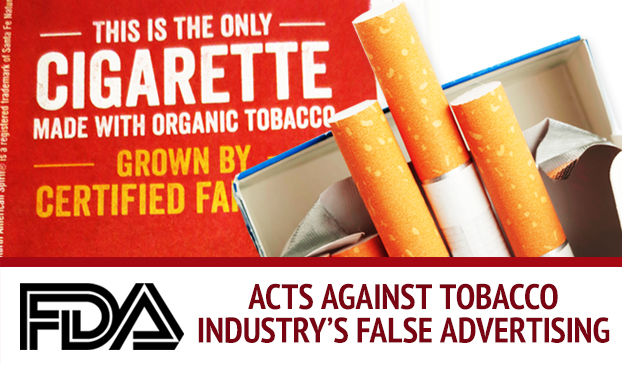 The FDA has issued letters to three tobacco manufactures urging them to alter the advertising tactics used on natural and additive-free cigarettes. The FDA believes the wording will lead consumers to believe that some kinds of cigarettes are safer than others.

You’re a dedicated cigarette smoker, but this year you want to make an effort to be more health conscious. When shopping for cigarettes, you may see a product that has the words ‘natural’ or ‘additive-free’ written on the label. You compare the packaging and choose the brand that seems the healthiest.

In a recent crackdown, the FDA has demanded three tobacco companies stop advertising their cigarettes with wording that may be misleading to consumers.

This is the first time the FDA has taken action to enforce a law that was created six years ago. The historic move will change the way tobacco products are labeled. 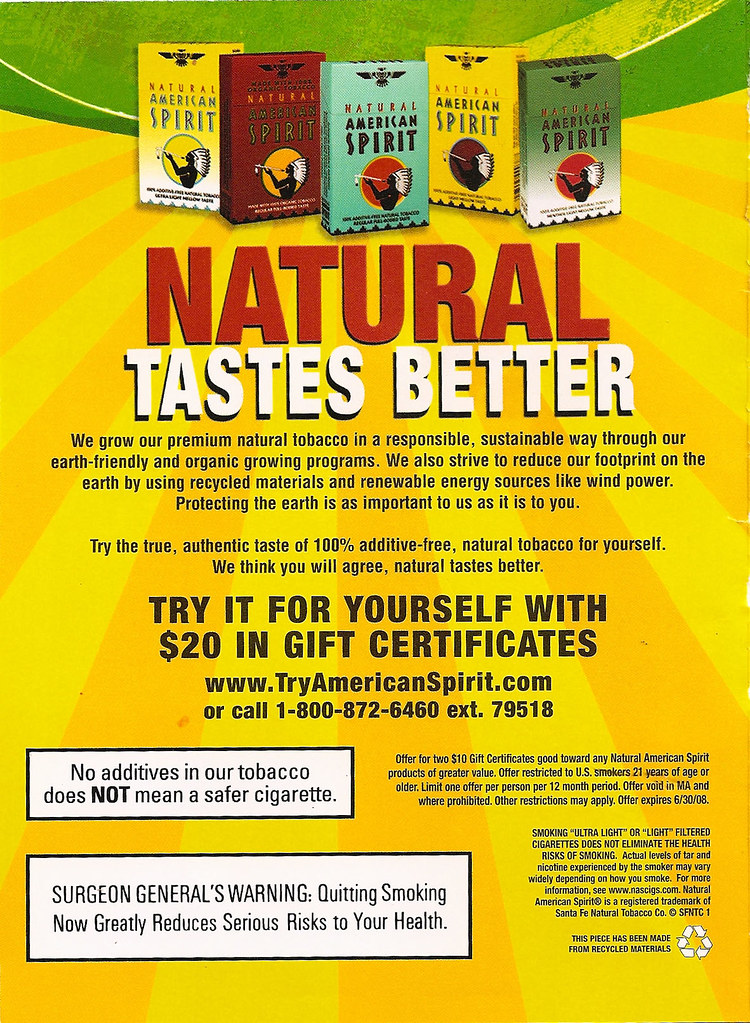 American spirit cigarette advertisements feature the standard surgeon general’s warning and an additional warning for cigarettes with no additives.
Via: Flickr

An FDA ruling in 2000 compelled cigarette companies that claimed their products use natural tobacco had to include “no additives in our tobacco does NOT mean a safer cigarette” on the labeling, along with the standard surgeon general’s warning.

But in 2009, legislators passed the Tobacco Control Act, which gave the FDA the authority to “regulate the manufacture, distribution, and marketing of tobacco products to help all Americans, especially young people, live longer, healthier lives.”

The law allowed the FDA to:

The warning letters discuss violations of section 911 of the Federal Food, Drug, and Cosmetic Act, urging the companies to alter their labeling to make sure that it doesn’t present “a lower risk of tobacco-related disease” that makes their product appear “less harmful than one or more other commercially marketed tobacco products.”

The FDA is waiting for a response from three companies that have been asked to alter the advertising on their cigarette packages.
Via: Viral Sneak

The press release detailing the offense was issued on August 27. The three companies were contacted by the FDA and must respond to the letters in no more than 15 business days with an explanation of how they plan to remedy the issue.

The FDA believes these companies are not in compliance with the law. The companies have the option to give an explanation and  provide evidence if they believe they are not in violation of the law. If they fail to respond, the FDA may initiate civil financial penalties, criminal prosecution, seizure and/or injunctions.

ITG has responded in a statement that its product complies with the state and federal regulations. According to the representatives, “while we disagree with the FDA’s position on this issue, we intend to engage with the FDA and respond to their letter in the coming days.”

According to a statement from Mitch Zeller, director of the FDA’s Center for Tobacco Products, the agency is just doing its job.

“The FDA’s job is to ensure tobacco products are not marketed in a way that leads consumers to believe cigarettes with descriptors like ‘additive-free’ and ‘natural’ pose fewer health risks than other cigarettes, unless the claims have been scientifically supported,” he said.

“This action is a milestone, and a reminder of how we use the tools of science-based regulation to protect the U.S. public from the harmful effects of tobacco use.”