The unregulated coal industry has polluted the air and contaminated groundwater with radioactive chemicals that are dangerous to human health.

Research shows that radioactive coal ash is prominent in regions where coal-burning power plants are an economic staple.

According to Greenpeace, coal ash is “highly hazardous, often containing arsenic, mercury and lead.” Because coal ash waste is unregulated and understudied, high levels of radioactive contaminants are becoming a major cause for concern.

The organization has issued a warning for residents living near coal burning power plants and waste dumps, asserting that close proximity to toxic chemicals could increase the risk of cancer, heart damage, lung disease, birth defects and other serious illnesses.

The three main areas in the United States that were included in the study are pictured above.
Image: ACS Publications

The study was conducted by researchers at Duke University and published in the journal Environmental Science and Technology on Sept. 2.

The findings show the highest occurrence of radioactivity in the Illinois basin. The second highest levels of radioactivity were found in the Appalachian and Powder River basins in Montana and Wyoming.

Coal naturally contains radium isotopes and lead-210, which are not harmful until they have experienced a chemical reaction. When coal burns and combusts, radioactive elements are concentrated in coal ash waste. Lead-210 becomes readily vaporized and sticks to ash particles in the air.

“This study raises the possibility that we should also be looking for radioactive elements, such as radium isotopes and lead-210, and including them in our monitoring efforts,” said study co-author Avner Vengosh, professor of geochemistry and water quality at Duke University’s Nicholas School of the Environment.

Lack Of Regulation Leads To Pollution 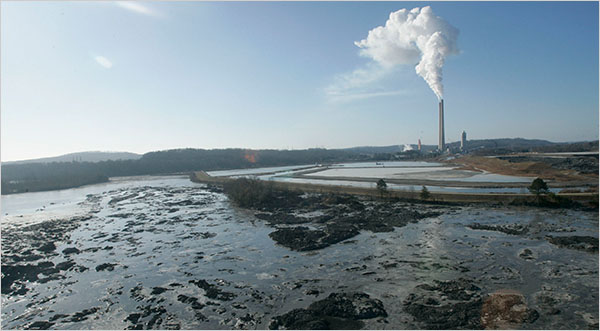 Coal ash dumps contribute to fossil fuel pollution and continue to add to the effects of climate change. The government does not regulate radioactive coal ash, allowing the waste to be kept in holding ponds and landfills near coal burning power plants.

The holding ponds leak into groundwater, contaminating it with dangerous chemicals such as selenium and arsenic. To make matters worse, these sites are not being tested for radioactivity.

“We don’t know how much of these contaminants are released to the environment, and how they might affect human health in areas where coal ash ponds and landfills are leaking,” said Vengosh.

In an effort to draw the attention to the issue, the study has identified coal ash residue as a significant pollutant. Researchers will continue to measure its presence in the air and evaluate the potential long- and short-term risks.

Is Regulation In The Near Future?

When the researchers measured the amount of radium and uranium in the parent coal and in the residual coal ash, they found a consistent ratio. The findings could help to measure how dangerous coal ash waste in future studies, which would make cleanup efforts easier.

“This means we can predict how much potential radioactivity will occur in coal ash by measuring the uranium content in the parent coal, which is easily discerned,” Vengosh said.

“This analysis can be applied to all coal ash worldwide, and is useful information for regulators, industries and scientists alike.”

Now that researchers in the United States have identified coal ash reside as a pollutant and a dangerous contaminant, the Environmental Protection Agency will meet to discuss coal ash disposal regulations in October.

Despite the fact that the American government is orchestrating a cleanup plan, it’s hard to predict if China will help the global community reduce the overall effects of climate change.