Now reading: E-Cigarettes Might Be A Gateway To Traditional Cigarettes 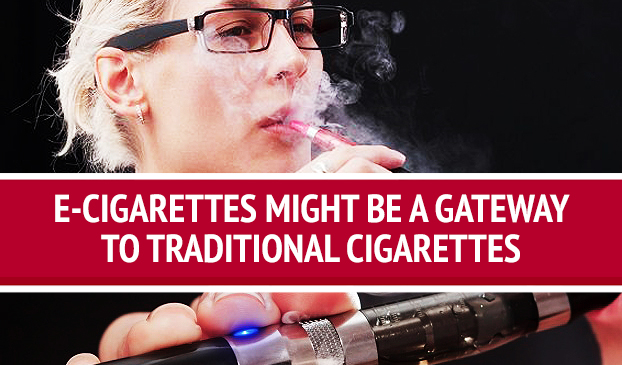 A new study confirms that youths who use electronic cigarettes are more likely to switch to traditional tobacco cigarettes.

Vaping is a relatively new fad, and researchers all over the world are trying to figure out how it will impact the population.

Because so many scientists are gathering data on vaping, the studies often conflict. Some support e-cigarettes as smoking cessation therapies, while others reject them as gateway products.

As the FDA grapples with how to regulate e-cigarettes, a new study sponsored by the National Cancer Institute shows that teens who vape are more likely to move on to traditional tobacco cigarettes.

The study will be published in the November edition of the journal JAMA Pediatrics. It’s one of many that attempts to discern the benefits from the negative effects of e-cigarettes.

Researchers at the University of Pittsburgh and Dartmouth-Hitchcock Norris Cotton Cancer Center conducted a study that tracked 694 people between the ages of 16 to 26. The majority of participants were considered to be “non-susceptible” and had no intention of smoking cigarettes. Only 16 people, or 2.3 percent of participants, were already using e-cigarettes at the start of the study in 2012.

One year later, 37.5 percent of e-cigarette users had transitioned to cigarettes, compared to only 10 percent of youths who were not already using e-cigarettes.

About 31 percent of e-cigarette users changed their mind about intending to smoke cigarettes, compared to 9.3 percent who were not using e-cigarettes at the beginning.

The authors took additional factors that could have influenced e-cigarette users into account. The study did not focus on the frequency of e-cigarette use, intention to experiment or if e-cigarettes and cigarettes were being used simultaneously.

The FDA is in the process of deciding how heavily e-cigarettes will be regulated.
Image: Electronic Cigarette Consumer Reviews

The results are based on the idea that e-cigarette users are becoming conditioned to enjoy sensation-seeking behavior, which could make them more likely to smoke traditional cigarettes. Some also argue that vaping is more attractive to younger generations.

“E-cigarettes are not subject to many laws that regulate traditional cigarettes, such as age limits on sales, taxation and labeling requirements,” said lead author Brian A. Primack, MD, PhD, director of CRMTH and assistant vice chancellor for health and society in Pitt’s Schools of the Health Sciences.

“They also come in youth-oriented flavorings that laws have limited in traditional cigarettes, such as apple bubble gum and chocolate candy cane.”

These individuals may have transitioned to smoking tobacco cigarettes regardless. But when the authors adjusted the study to include additional factors and sensation-seeking tendencies, there was still a link between e-cigarette use and a transition to traditional cigarettes.

The study authors cite three main reasons that e-cigarettes might be a gateway to traditional smoking:

The FDA is in the process of analyzing data from various studies to make decisions on how to regulate e-cigarettes. Some hope that e-cigarettes could be a healthier alternative to traditional cigarettes, whereas others believe the products could create a new generation of nicotine addicts.

“It will be important to continue surveillance among youth of both e-cigarette use and overlap with use of other tobacco products,” according to the study authors.