Now reading: Alzheimer’s May Be Transmitted Through Medical Procedures

British researchers have potentially linked Alzheimer’s, CJD and other degenerative brain diseases to surgeries and medical procedures that use human growth hormones.

Alzheimer’s may be transmitted through certain medical procedures and surgeries, according to a new study from British researchers.

The study focuses on the possibility that treatments introducing the human growth hormone, an active ingredient in a number of prescription drugs, could transmit Alzheimer’s. 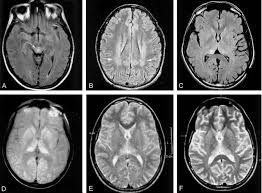 In the study, six patients showed precursors for beta amyloid proteins, which may have been caused by genetic mutations associated with early-onset Alzheimer’s.
Image: American Journal Of Neuroradiology

The study, conducted by British researchers John Collinge and Sebastian Brandner, was published in the international science journal Nature.

Researchers analyzed autopsies of British patients ages 36 to 51. The patients are thought to have developed Creutzfeldt-Jakob disease (CJD) through treatment with human growth hormone from cadavers. CJD is a rapidly progressing degenerative brain disease that is similar to Alzheimer’s.

In addition to CJD, the report showed another abnormality. Six patients showed precursors for beta amyloid proteins, which may have been caused by genetic mutations associated with early-onset Alzheimer’s.

Amyloid plaques are the main proteins found in the brains of Alzheimer patients. The presence of these proteins caused the researchers to question if the human growth hormone procedures could somehow transmit the building blocks for degenerative brain disease. The pituitary gland is the major endocrine gland attached to the base of the brain, which controls growth, development and the functioning of the other endocrine glands.
Image: Wise Geek

The human growth hormone is produced by prions and pituitary glands, which contain compounds that can lead to amyloid beta abnormalities. Prions are proteins that can fold and transmit to other proteins in a form of replication that is similar to viral infection.

The evidence shows certain medical procedures could transmit precursors for the beta amyloid proteins that could cause Alzheimer’s. However, according to researchers, “there is no indication that Alzheimer’s disease can be transmitted between people under ordinary circumstances.”

The study builds on previous evidence that diseases caused by prions might be transmitted thorough certain medical procedures. In 1958 to 1985, British patients were treated with human growth hormone that was extracted from cadaver’s pituitary glands that had been contaminated with prion. These patients developed CJD.

In 2012, 450 cases of CJD have been linked to cadaver-derived HGH and other medical procedures such as transplant and neurosurgery. But with an incubation period of 30 to 50 years, a link between HGH and Alzheimer’s or other brain diseases is difficult to prove.

Because the sample is very small, there’s no direct proof that precursors for beta amyloid can lead to Alzheimer’s. The evidence shows that it may be transmissible, but researchers have yet to confirm the connection.

According to one of the study authors, the findings “relate to the specific circumstance of cadaver-derived human growth hormone injections, a treatment that was discontinued many years ago.”

“It is possible our findings might be relevant to some other medical or surgical procedures, but evaluating what risk, if any, there might be requires much further research,” Collinge, of University College London, said.

In 2012, a study from the University of Texas Medical Center found that mice injected with tissue from a human with Alzheimer’s developed characteristics of the disease. Another study involving mice was published in PLoS One, which showed brain abnormalities that lead to Alzheimer’s may spread like a virus from nerve cell to nerve cell.