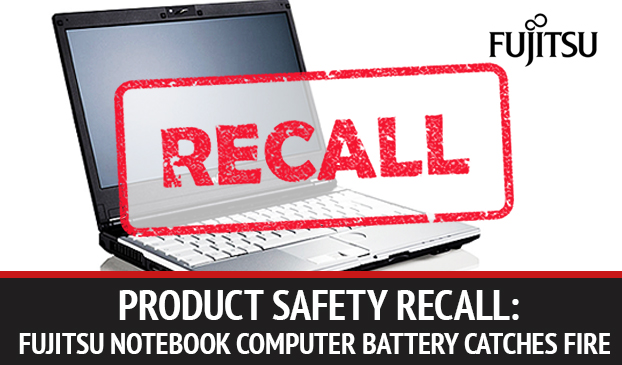 Fujitsu, a multinational information technology company, is recalling about 300 notebook computer batteries that will potentially overheat and catch fire.

Fujitsu America is recalling about 300 Fujitsu notebook computer battery packs at risk of overheating and catching fire. The battery packs pose a fire hazard to consumer and the company is offering replacements free of charge. The battery’s model number is located on the white label.
Image: CPSC

The model and serial number is located on the white battery label on the bottom of the computer. The batteries were sold between August 2012 through July 2015 for about $150.

The company was notified of the battery packs catching fire three times, specifically in Asia. Incidents occurred twice and Japan and once in China, causing fire damage to rugs, bedding, a desk and other furniture. No injuries have been reported. Fujitsu urges consumers to immediately turn off the computer, remove the battery and contact the company for a replacement free of charge. However, the Fujitsu notebook computer can be used without the battery pack by plugging in the AC adapter.

For more information, contact Fujitsu via phone at 800-838-5487 or online at www.fujitsu.com/us. Click on “Important Announcement: Voluntary Battery Recall and Replacement.”

“The Fujitsu Way embodies the philosophy of the Fujitsu Group, our reason for existence, values and the principles that we follow in our daily activities,” according to the website.