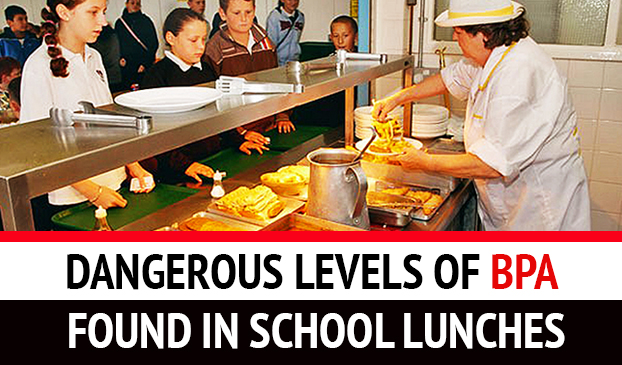 While analyzing the toxicity of student meals, researchers found that food provided by schools contains unsafe levels of BPA.

The study discovered that bisphenol A (BPA) had absorbed into the school food supply through the plastic or canned packages. It was spearheaded by Jennifer Hartle, a postdoctoral researcher at the Stanford Prevention Research Center.

The unique study was published in the Journal of Exposure Science and Environmental Epidemiology. Researchers attribute the presence of BPA to low-cost packaging that is used to make the food preparation process more effective while adhering to nutrition laws set by the federal government.

“During school site visits, I was shocked to see that virtually everything in school meals came from a can or plastic packaging,” Hartle said. “Meat came frozen, pre-packaged, pre-cooked and pre-seasoned. Salads were pre-cut and pre-bagged. Corn, peaches and green beans came in cans. The only items not packaged in plastic were oranges, apples and bananas.”

Unsurprisingly, they found that BPA exposure varies depending on what the students eat.

If students have pizza, milk, fresh fruits and vegetables for lunch, they would be exposed to a minimum and tolerable level of BPA.  But if pizza and milk are eaten with canned fruits and vegetables, students could be getting up to 1.19 micrograms of BPA per kilogram of body weight per day.

Researchers suggest that finding appropriate levels of BPA for vulnerable populations like children to consume can come from experiments that measure toxicity thresholds. Although not every species may not metabolize BPA as effectively, the chemicals have a toxic impact on mice at 2 micrograms per kilogram of body weight per day.

It’s unlikely that most students consume more than 2 micrograms per kilogram per day, but the study found that those who do could ingest more than half of the amount that’s found to be toxic to animals in just one meal.

Exposure to BPA can cause cancer, obesity, ADHD and diabetes, in addition to hormone, heart, brain and behavior problems.
Image: Stanford

BPA is a synthetic compound that has been used to make certain plastics and resins since the 1960s.

Some research has shown that BPA can seep into food or beverages from containers that are made with BPA. Exposure to BPA is a concern because of possible health effects of BPA on the brain, behavior and prostate gland of fetuses, infants and children.

The chemical effects human hormones and increases the risk of developing diseases, such as cancer or reproductive issues. Children are particularly susceptible to hormone disruption through continued exposure to BPA.

“With endocrine-disrupting chemicals particularly, there is so much uncertainty,” said Robert Lawrence, a medical doctor, one of the study’s authors and director of the Johns Hopkins Center for a Livable Future.

“We can’t tie a specific dose to a specific response like we can with lead. But we know BPA is impacting human health. Animal models are showing there can be a whole range of health effects. This research shows we should take a precautionary approach.”

The biggest impact of BPA exposure is on children who come from low-income families because they are more likely to eat federally-funded lunches. Many low-income students eat breakfast and sometimes even dinner at school. These children could be consuming extremely dangerous levels of BPA.

“Even a dose of one extra microgram per day could be a big deal,” Hartle said. “If this is an avoidable exposure, do we need to risk it? If we can easily cut it out, why wouldn’t we?”

In addition to urging schools to provide more fruits and vegetables for students, researchers call on parents to make lunches at home.
Image: Correos

In 1988, the U.S. Environmental Protection Agency said that 50 micrograms or less of BPA per kilogram of body weight per day is safe. Today, hundreds of scientific papers detail the dangers of BPA at levels lower than the EPA standard.

The European Food Safety Authority recently updated its standards for safe BPA intake to 4 micrograms per kilogram of body weight per day. The EPA has allowed Americans to consume 46 micrograms more than European regulators.

Schools should follow suit and limit BPA consumption by implementing more fresh fruits and vegetables into the student diet. Feeding children more fresh food in packed lunches and at home is also an important step in limiting exposure, according to Hartle.

But be aware that “BPA-free” items are not necessarily safer, as it is likely they possess other harmful chemicals.

“The bottom line is more fresh fruits and vegetables,” Hartle said. “There is a movement for more fresh veggies to be included in school meals, and I think this paper supports that.”