Now reading: Why Are U.S. Patients Paying More For Pharmaceuticals? 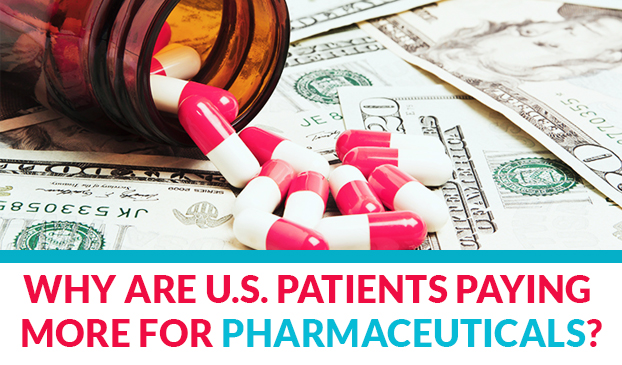 The International Federation of Health Plans concluded that Americans are paying six times more for prescription medication than the rest of the world.

The unreasonably high price of pharmaceuticals in the United States has shined a bright light on the drug industry, exemplifying the fact that Americans are paying much more for medication than patients in other countries.

The government healthcare budget for prescription drugs is low in comparison to other nations.

Americans are paying more for brand-name drugs across the board, but cancer patients and those in need of specialty medications are the hardest hit.
Image: Jaron Associates

American insurance companies pay about $215 per customer each month for the acid reflux drug Nexium. In the Netherlands, an equivalent prescription costs about $23.

Data from the International Federation of Health Plans shows that pharmaceuticals in the United States are six times more expensive than in other countries.

The priciest drugs are specialty and cancer medications, but standard prescriptions are costly as well. Cancer treatment pill Gleevec costs patients about $6,214 per month in the United States, compared to $1,141 in Canada and $2,697 in England.

Americans who suffer from depression could pay $194 for Cymbalta, but the price is $46 in England and $52 in the Netherlands.

The health care system in the Unites States is more competitive than other countries. Fewer players would allocate more purchasing power to certain groups, which would give them the ability to negotiate a reduced cost.

The United Kingdom’s National Health Service supplies the country’s drugs through bulk purchases called formularies. The U.S. has multiple unregulated private insurance firms, hospitals and plans that buy for individual groups of consumers. Through different plans, consumers allow companies to negotiate prices with the pharmaceuticals on their behalf.

But a smaller pool of negotiators yields more power to the consumer, allowing patients to decide what they are willing to pay.  In a system like this, companies are forced to make fair negotiations if they want to be a part of the marketplace.

The Root Of The Problem

Pharmaceutical companies have the power to set drug prices without explanation.
Image: Budding Into Fullness

Pharmaceutical companies are in control of setting drug costs, and it’s clear that they are putting profits before people.

A Kaiser Family Foundation poll found that 72 percent of Americans think drug costs are unreasonable and want drug companies to release information on how they set prices. The current system leaves consumers without a choice or an explanation.

Pharmaceutical trade group PhRMA attributes the high prices to the funding of research and development. According to PhRMA, companies invest almost $2.6 billion dollars on average for more than 10 years to bring a drug into the marketplace. Many new drugs never make it.

But critics disagree. Many medical experts believe that drug companies set the prices high solely because they can.

“We have no rational system in the U.S. for managing prices of drugs,” Dr. Peter B. Bach, director of Director of Memorial Sloan Kettering’s Center for Health Policy and Outcomes told CNN.

Medicare provides drug treatments for a majority of Americans, but the provider is prohibited from negotiating with drug companies. Presidential candidates Hilary Clinton and Bernie Sanders have addressed necessary industry changes as a  core of their platforms.

“People should not have to go without the medication they need just because their elected officials aren’t willing to challenge the drug and health care industry lobby,” Sanders said in a statement on his official website. “Between our government’s unwillingness to negotiate prices and its failure to effectively fight fraud, it’s no wonder drug prices are out of control.”

In Germany, nonprofit health insurers are able to bargain with pharmaceuticals and health providers to get the best price possible. Medicare should be able to use its buying power to set prices by negotiating directly with pharmaceutical companies to find a reasonable cost.

The United States lacks a central agency, federal or non-governmental, to conduct research that focuses on drug efficacies. A system in Canada allows providers to compare drugs to similar treatments on the market to determine an accurate price.

Only by regulating the drug industry and gaining the power to negotiate with pharmaceutical companies will the price of pharmaceuticals in America decline.