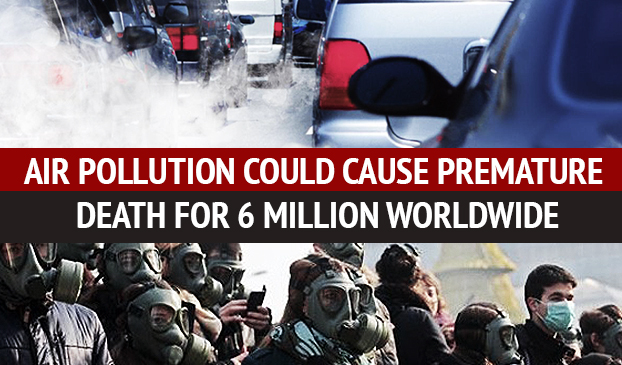 Researchers estimate the amount of people who die early from diseases caused by exposure to air pollution will more than double by 2050.

More than 3 million people die prematurely from prolonged exposure to air pollution each year, according to the World Health Organization.

A new study shows the number could more than double by 2050. Researchers predict that 6.6 million people could die early from exposure to air pollution.

Fuel emissions from cooking and heating in countries such as India and China had the largest impact worldwide, according to Jos Lelieveld, a leading study author and a professor at the Max Planck Institute for Chemistry in Germany.

“When most people think of outdoor air pollution, they tend to think of traffic and industry having the largest impact on global premature mortality, not residential energy emissions and agriculture,” Lelieveld told CNN..

The study was conducted using atmospheric chemistry devices that took measurements on the ground and via satellite. The technology compared the amount of fine particle matter in air pollution from different emission sources globally.

“Testing for the effects of air pollution emissions in different parts of the world was a very challenging task,” Lelieveld said, “especially in many developing countries, where air quality monitoring systems are minimal.”

In the United States, agriculture and traffic emissions mix in the atmosphere to create a dangerous brew of pollutants.
Image: Humans Are Free

The highest death rates caused by exposure to air pollution are in the Western Pacific region,  eastern Mediterranean and Southeast Asia.

The main cause of early death in major areas of Asia, such as China, India, Bangladesh, Indonesia and Nepal was due to low-quality fuels used for cooking, heating and waste disposal.

Agricultural emissions are the most significant contributors in the Eastern United States, Europe, Russia, Turkey, Korea and Japan. Secondary causes are traffic and power generation emissions.

Chemicals mixing in the atmosphere create a brew that is harmful to your body. Fertilizers and animals release ammonia that fuse with traffic emissions, which contaminate the air.

The study also cites natural forms of pollution such as desert storm sands, which are prominent in the Middle East, North Africa and Central Asia.

Chronic exposure to air pollution particles contributes to the risk cardiovascular issues, respiratory diseases and lung cancer, according to the WHO.

“The total number of deaths due to HIV and malaria is 2.8 million per year,” Lelieveld said. “That’s half a million less than the number of people who die from air pollution globally.”

The study uses toxicity levels to identify the source of pollution in order to improve public health. Each country is better able to address the atmosphere when they’re aware of the specific issues.

“It takes more than making the technology available. You have to convenience people to abandon traditional ways of doing things, which is not easy,” Lelieveld said. “This can be a win-win situation. Changes on the individual level can have a positive impact, not only on our health but also on climate change.”