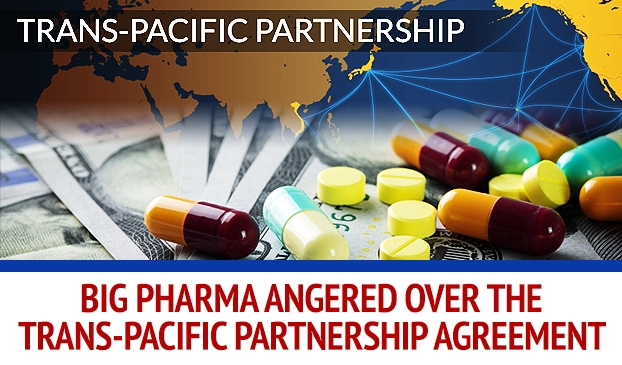 The Trans-Pacific Partnership Agreement protects the exclusivity of biologic medicine in international markets, but Big Pharma isn’t satisfied with the details of the deal.

The Trans-Pacific Partnership Agreement, which deals with intellectual protection for certain drugs, is extremely controversial.

The agreement between the U.S. and 11 other countries will soon be up for debate in Congress. However, the current plan doesn’t satisfy pharmaceutical companies or consumers.

The Stipulations Of The Deal Under the agreement, countries must protect data for biologic medicines. Biologic medicines, produced by living cells, would be protected abroad for a minimum of five to eight years.

Big Pharma was hoping for at least 12 years of protection while consumer groups wanted to keep minimum exclusivity.

The rule would give certain companies a monopoly on drugs and prohibit others from creating biosimilars for a pre-decided period of time. Similar drugs cannot enter the market with clinical trial data from the original drug.

Many countries don’t implement data exclusivity. The agreement would require that these countries create laws that would give certain companies a monopoly for five years.

“In the U.S., I don’t think there would be that much that would need to change,” said Joy Liu, a partner at Ropes and Gray who advises drug and biotech companies on FDA-related matters.

Domestic pharmaceutical companies who invested in the research and development of drugs abroad would be affected by competition in foreign markets, which is the reason why the industry has called for data protection.

“PhRMA believes that strong intellectual property protection is necessary for the discovery and development of new treatments and therapies for the world’s patients,” said John Castellani, CEO of industry group the Pharmaceutical Research and Manufacturers of America, in a statement.

Castellani believes that biologic medicines are “next wave of innovation in our industry.”

“While we await final details, it appears that the Ministers missed the opportunity to encourage innovation that will lead to more important, life-saving medicines that would improve patients’ lives,” Castellani said.

Many critics believe that the deal is about concentrating power, not ensuring fair trade.

“The problem of drug pricing is increasingly out of control in the U.S. and everywhere,” Maybarduk said. “Of course we need to pay for medical innovation, but there are more efficient ways to do that than monopolies.”

Doctors Without Borders also disagreed with the deal.

“Although the text has improved over the initial demands, the [trade agreement] will still go down in history as the worst trade agreement for access to medicines in developing countries, which will be forced to change their laws to incorporate abusive intellectual property protections for pharmaceutical companies,” said Judit Rius Sanjuan, legal policy adviser to the group’s access campaign, in a statement.

Biologics are given patents that could make data exclusivity unnecessary. While patent laws prohibit biosimilars from joining the market for a certain time period, the pharmaceutical industry criticized them as weak in comparison to traditional drugs, said Arti Rai, a law professor at Duke University.

Congress must approve or reject the deal without amending it.
Image: The Real Daily

Congress had previously agreed to fast track the agreement, but it’s not clear if Congress will agree to the deal now. The regulatory body must approve it or throw it out without amending it.

The Senate Finance Committee won’t approve the agreement unless the intellectual property right laws of U.S. trade partners are created and expanded.

The chair of the committee, Sen. Orrin Hatch (R-Utah), fully expects the Trans-Pacific Partnership agreement to include 12 years of regulatory data protection for biologics.

However, Democrats expressed concern in July that the deal may be rejected  if it doesn’t conform to the agreement reached by House democrats and President George W. Bush in 2007, which set exclusivity at five years.

“As members who support trade done right, we strongly believe that the [Trans-Pacific Partnership] must not inhibit access to lifesaving medicines,” the lawmakers wrote.

Rai said that a complicated mix of politics will decide the fate of the trade agreement.

“It’s certainly a compromise, there’s no doubt about that,” Rai said. “In general, compromise in these areas seems to be better than one side entirely winning the game.”

Congress needs to pay attention how the deal will affect the pharmaceutical industry and smaller companies that are doing the ground level research.

The agreement raises questions about whether they would continue researching certain drugs without longer exclusivity protections.