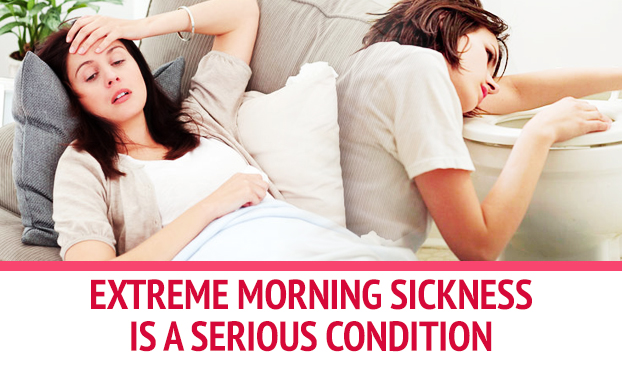 Extreme morning sickness, also known as hyperemesis gravidarum, is a dangerous condition that impacts both the mother and her unborn baby. Hyperemesis gravidarum has been linked to a pregnancy hormone called human chorionic gonadotropin (HCG). The hormone is created in the placenta to assist in providing nutrients for the baby during pregnancy.

The hormone is produced rapidly early in pregnancy, usually in the first three months. The hormone doubles every 48 to 72 hours and increases throughout the duration of the pregnancy.

Standard morning sickness and hyperemesis gravidarum are separate conditions with distinct symptoms that require very different treatments. Extreme morning sickness is more likely to develop when the mother is pregnant with more than one child, or if she has a hydatidiform mole.

A hydatidiform mole is a type of gestational trophoblastic disease (GTD) that forms a growth inside the womb at the beginning of a pregnancy.

Morning sickness is characterized by:

Hyperemesis gravidarum is characterized by: Kate Middleton was hospitalized because the severity of symptoms caused by extreme morning sickness.
Image: Express

No one is exempt from the effects of extreme morning sickness. Even Kate Middleton, the wife of Britan’s Price William and the Duchess of Cambridge, dealt with hyperemesis gravidarum.

While she was pregnant with her second child, Middleton suffered from hyperemesis gravidarum. She experienced violent vomiting and weight loss during the early stages of both of her pregnancies. The effects were so severe that she had to be hospitalized.

If untreated, severe morning sickness can cause dehydration, poor weight gain, and social or psychological problems. Women may not gain sufficient weight during pregnancy, which is a threat to the development of the fetus.

While the condition is extremely dangerous, there are many drugs used to manage its symptoms.

Doctors may prescribe anti-nausea medications to relieve symptoms of extreme morning sickness. Many, such as Zofran, could cause serious side effects.
Image: Babble

The severity of the morning sickness may decrease if the mother eats small, frequent meals and dry foods such as crackers.

While dealing with extreme morning sickness, pregnant women should drink a lot of fluids, especially during times when nausea isn’t present. Good examples of fluids other than still water include seltzer, ginger ale, or other sparkling waters. Some women must be admitted to the hospital to receive fluids if dehydration worsens.

In addition, women can take Vitamin B6 (no more than 100 mg daily) to help with nausea. However, in some cases, doctors may prescribe anti-nausea medicine.

Zofran, often used to treat extreme morning sickness, can be a great remedy for some women. The drug was originally used for cancer patients with extreme nausea from cancer treatments like chemotherapy and radiation.

However, Zofran has been associated with a variety of birth defects. It has caused cleft lips, cleft palates, club feet, craniosynostosis and congenital heart and lung problems in newborns.

If you took Zofran while pregnant and your child was born with birth defects, you could be entitled to medical compensation. Click here for a free case evaluation