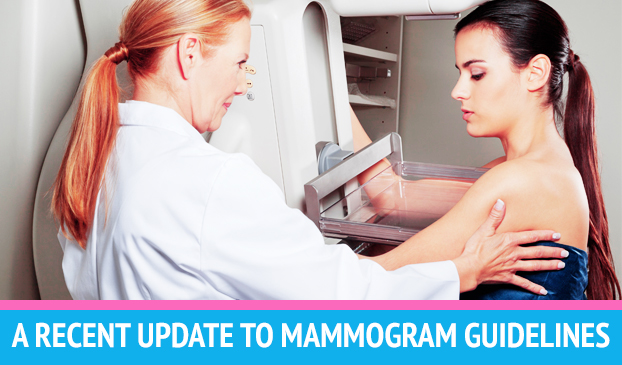 The American Cancer Society recently made changes to its mammogram and breast exam recommendations.

The American Cancer Society has revised its guidelines, recommending that women have fewer mammograms beginning at a later age. The group originally urged women to get a mammogram and a clinical breast exam every year after they turn 40.

The society now suggests a breast cancer screening every year from age 45 to 54. The women should then get cancer screenings every other year until it is no longer likely that they will live another 10 years.

Reasons For The Shift

Breast cancer is uncommon in women under the age of 45 and the risks decrease after menopause, which creates a target age group for testing.
Image: Safe Bee

The new guidelines were published in the Journal of the American Medical Association, along with an editorial and an article on the benefits and risks of screening. Another article and editorial were also published in JAMA Oncology.

Women who don’t have a personal, family or genetic history are considered to have an average risk of developing breast cancer. The guidelines only apply to these women.

A clinical breast exam involves a lump inspection for women of all ages, regardless of if they have experienced symptoms or breast abnormalities. Many of these women do not need additional exams.

Regular mammography can reduce the risk of dying from breast cancer by about 20 percent, but breast cancer is less common in younger women. New evidence illustrates the flaws of mammography, such as false-positive results, overdiagnosis and unnecessary biopsies.

The new guidelines were based on a 2001 study that found 61 percent of women who had yearly mammograms starting at age 40 had at least one false-positive by the time they were 50. The JAMA Oncology article showed that this was cut to 42 percent when women were tested less frequently.

The recommendation attempts to weigh the risks for each age group. Because breast cancer is uncommon in women under 45, the recommended testing begins at that age and continues once a year as women get older.

The risk of developing breast cancer during the next five years is 0.6 percent in women ages 40 to 44, 0.9 percent from ages 45 to 49 and 1.1 percent from ages 50 to 54. But at age 55, the majority of women are finished with menopause and the risk stops increasing. In addition, tumors are not as aggressive and mammograms are easier to read.

The American Cancer Society made sure to not be too strict, staying open to each women’s preferences. Women from age 40 to 44 may still “have the opportunity” to receive tests if they desire. Mammograms should still be available for women age 55 and older.

Some argue that early and yearly mammograms were meant to counteract the fear of missing the presence of breast cancer.
Image: Market America

Many health professionals continue to encourage women to seek out breast exams as early and as frequently as possible. However, some groups suggest fewer check-ups. Doctors and patients are equally confused about how to interpret the information.

Dr. Nancy L. Keating, a professor of health care policy and medicine at Harvard and a co-author of the JAMA editorial, said the guidelines were headed in the right direction. While some doctors hope the new guidelines will help to end the confusion, others worry that they are no better than the last.

“I think it has the potential to create a lot of confusion amongst women and primary care providers,” said Dr. Therese B. Bevers, the medical director of the Cancer Prevention Center at the University of Texas M.D. Anderson Cancer Center in Houston.

The American College of Obstetricians and Gynecologists  will be holding a conference in January to collaborate with the American Cancer Society and other groups to agree on the guidelines.

“This area is rapidly changing. In five to seven years, we’ll have more knowledge in this area that will let us be more personalized in our approach,” Dr. Kevin C. Oeffinger, the chairman of the cancer society subgroup that developed the guidelines.