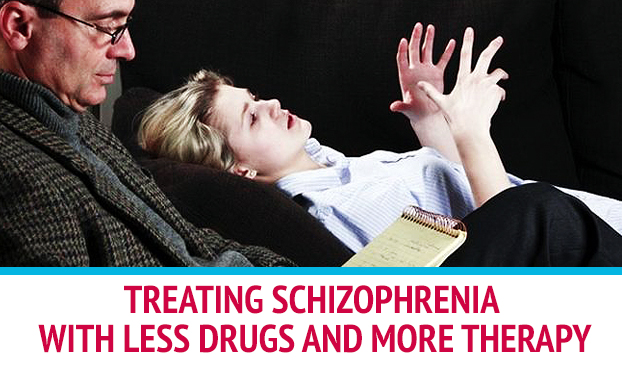 A new study rethinks the treatment of schizophrenia and proves that patients would benefit from fewer antipsychotics.

Schizophrenia is a mental health disease that affects more than two million people in the United States alone. The condition is often treated with heavy, dazing antipsychotic drugs.

The medication stops the symptoms of schizophrenia but leaves patients with a slew of side effects, such as severe weight gain or debilitating tremors.

A new federally-funded study calls for a different way to treat schizophrenia, focusing on providing less medication and more options for therapy.

The research was published in the American Journal of Psychiatry after a series of in-depth trials. The study suggests that patients who took small doses of antipsychotics combined with one-on-one talk therapy and family support saw better results than those who were overprescribed and sedated.

Funded by the National Institute of Mental Health, the study found that patients who received active therapy after the first schizophrenic episode did much better in recovery.

“I’m very favorably impressed they were able to pull this study off so successfully, and it clearly shows the importance of early intervention,” said Dr. William T. Carpenter, a professor of psychiatry at the University of Maryland School of Medicine.

The study is based on successful programs that have been used in Australia and Scandinavia for decades. This is the first real-world trial of this method.

The study was conducted at 34 community mental health centers in 21 states randomly assigned either drugs, therapeutic treatment or both. It included 404 people with first-episode psychosis in their late teens or 20s, half of which received the new approach. The other half of patients received antipsychotic care.

The patients were monitored with standardized checklists that rate symptom severity and quality of life, taking into account the ability to work and get along with family. Patients in the combined program had more symptom relief and functioned better.

The medicated group experienced side effects including weight gain, extreme drowsiness or emotional numbing. Studies show that three-quarters of people prescribed antipsychotics stop taking them within a year and a half.

“As for medications, I have had every side effect out there, from chills and shakes to lockjaw and lactation,” said a 20-year-old trial participant named Maggie. Maggie benefited from the newer approach and is now attending nursing school.

Medications were still used during treatments, but doses were kept at a minimum to keep side effects at bay. The therapy package included help with work and school decisions and increased education for family members. The final component is one-on-one talk therapy, in which the doctors help the patient build social relationships, reduce substance use and manage the symptoms.

“One way to think about it is, if you look at the people who did the best — those we caught earliest after their first episode — their improvement by the end was easily noticeable by friends and family,” Dr. Kane said.

A Change In Mental Health Reform

Mass shootings related to mental illness continue to increase, and Congress is currently deciding on reforms that will help combat episodic violence.

In its guidelines, the Centers for Medicare & Medicaid Services strongly agreed with the combined therapy approach. The reform bills now “mention the study by name,” said Dr. Robert K. Heinssen, the director of services and intervention research at the National Institute of Mental Health.

Critics believe that the current methods used to treat schizophrenia are ineffective, especially in the onset of psychosis. The early stages of the disease usually occur in the late teens or early 20s. The hope is that the study will set a new standard for care.

Dr. Kenneth Duckworth, medical director for the National Alliance on Mental Illness, an advocacy group, said the study was “a game-changer for the field” because it chooses a therapeutic method based on the stage of the disease.