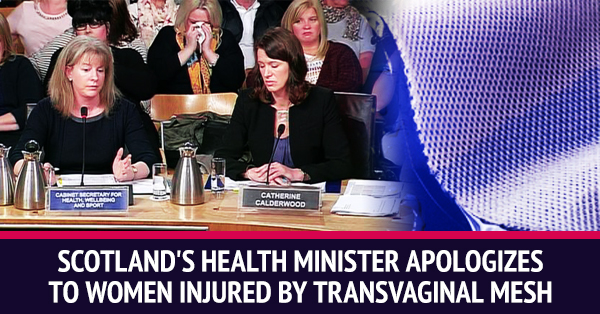 While the health agency in Scotland attempts to deal with complications caused by transvaginal mesh implants, the FDA has stayed quiet.

The U.S. Food and Drug Administration issued a public health communication about the dangers of transvaginal mesh for the first time in 2008. The warning came after the agency received over 1,000 reports from nine surgical mesh manufacturers in just three years.

Some governments have recognized that they have failed to provide the kind of education that would protect mesh patients from suffering. Scotland has issued an apology for their lack of attention to the dangers of transvaginal mesh, committing to finding a better way to regulate the devices and inform the public about possible side effects. In Scotland, transvaginal mesh devices caused a whole slew of complications for hundreds of women who had already been suffering from prolapse or urine issues.

The Medicines and Healthcare Products Regulatory Agency (MHRA) released data on how many women are affected by the devices. Of the 1,850 patients implanted with mesh in Scotland each year, the agency found:

But the victims of transvaginal mesh felt that they had been ignored. They began to organize and fight for justice, coming together to create a group called Scottish Mesh Survivors. After launching a petition, the survivors finally got the government’s attention. The apology was later issued at a committee hearing.

“I’m happy to apologize to the women for having to basically campaign to bring it to everyone’s attention,” according to Shona Robison, the Cabinet Secretary for Health, Wellbeing and Sport in Scotland.

“It should never have taken women to have to campaign in this way to shine a light on this issue. I want to thank them for all that they have done. They have left a legacy for other women,” she added.

Two members of Scottish Mesh Survivors, Elaine Holmes and Olive McIlroy, have called for an independent investigation that would evaluate the safety of mesh devices. In addition, the agency is working to institute training programs for medical staff to better inform potential mesh patients about the possibility of side effects.

FDA Stays Quiet On The Subject

Although the U.S. government has spoken about mesh complications before, the agency has yet to follow suit. In 2011, the FDA updated the initial announcement in a safety communication that affirmed “serious complications associated with surgical mesh for transvaginal repair of POP are not rare.”

The statement also informed the public that the FDA will “evaluate the effects of using surgical mesh to repair SUI,” with the results being announced at a later date. It has been almost five years since the agency made this statement.

In the interim, many patients who have transvaginal mesh implants have experienced severe pain and suffering. If your vaginal mesh failed and required an additional surgery, then you might be entitled to compensation for receiving a faulty medical device.

Complete a free, no obligation case evaluation now to see if you qualify.