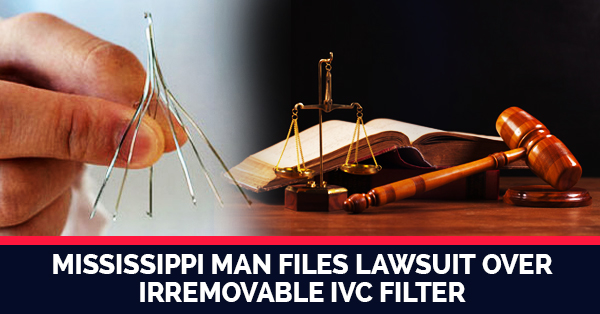 A Mississippi man filed a lawsuit to obtain monetary awards as compensation for pain and suffering caused by an irremovable IVC filter medical device.

Mississippi man Alec Caldwell had a blood clot filter implanted in his inferior vena cava. It seemed the device was working well until he started to experience severe pain.

Caldwell attempted to have his filter taken out and discovered that the device was not only impossible to remove, but also had rotated and damaged his essential IVC vein.

He has since taken legal action and filed a product liability and personal injury lawsuit against the device manufacturer, who allegedly knew about the risk of perforation and difficulties with removal.

Complications With Perforation And Removal

IVC filters may shift and become tilted, situating the device in a position that would lead to vein perforation and extended medical problems.
Image: Research Gate

Caldwell had the Eclipse model IVC filter implanted in his body on Sept. 29, 2010. It was meant to stop blood clots from traveling to the lungs, which could cause pulmonary embolism to occur.

Bard, the makers of the IVC filter, allegedly knew about the device’s risks and didn’t inform the consumer. The lawsuit states that Bard was aware of the product’s “serious design and manufacturing flaws causing it to have inadequate stability and structural integrity, as well as a high propensity to perforate the vena cava.”

On Dec. 9, Caldwell decided to file a lawsuit against the manufacturer of the medical device that caused him serious pain and suffering.

In the lawsuit, prosecutors argue on Caldwell’s behalf, claiming that he “suffered and will continue to suffer significant medical expenses, pain, suffering, emotional distress, loss of enjoyment of life, psychological trauma, anxiety, hedonic damages, lost wages, loss of earning capacity, the need for medical monitoring of the Eclipse filter, and any other form of damages under the law of the subject forum.”

The prosecutor intends to hold Bard liable for manufacturing, information and design defects, negligence due to failure to recall products and warn consumers, breach of warranty, fraudulent misrepresentation and concealment. The goal is to provide Caldwell with enough financial restitution to cover his medical bills, lost income and more.

If you experienced difficulties removing your IVC filter, you may also be entitled to compensation.

Take the next step and request a free case evaluation to learn about your legal rights.