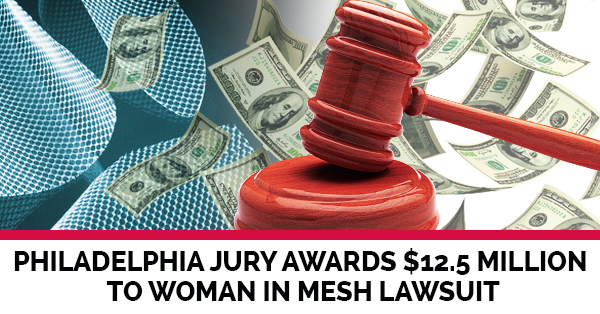 A Philadelphia court awarded millions in compensation to Patricia Hammons for complications caused by transvaginal mesh.

When Patricia Hammons received a transvaginal mesh implant in 2009, she never expected it to cause so many problems.

After dealing with continued pain and incontinence, Hammons had multiple corrective surgeries to repair the mesh. But the issue was severe that she could no longer engage in sex.

Hammons’ quality of life began to worsen, which prompted her to take legal action against the mesh maker. She shared her story in a Philidelphia courthouse, where she was awarded millions.

The mesh device, manufactured by Johnson & Johnson/Ethicon, was meant to treat pelvic organ prolapse. Hammons had the device implanted into her body at the age of 58.

Nearly 13 years later, Hammons found herself in a courtroom describing the severity of pain she experienced when attempting to have sex. Additionally, Hammons deals with incontinence, a condition that makes her unable to control her bladder.

Doctors attempted to repair the mesh issues with corrective surgeries. During one of the operations, it was discovered Hammons’ mesh had “bunched up” and perforated her bladder.

In December, a jury awarded Hammons $12.5 million as restitution for all that she had been through.

Hammons is 65 years old. She works at an Indiana Wal-Mart stocking shelves, earning a small income that couldn’t begin to cover her medical expenses.

A number of experts testified on Hammons’ behalf, proving that Johnson & Johnson knew about mesh failures since 2005. The court also heard testimony from a former product engineer who said device manufacturers lacked a solid backup plan to address potential complications.

A Philadephia jury believed Hammons was entitled to $5.5 million to assist with mounting health care costs. The award will also act as compensation for the loss of sexual function.

Request a free case evaluation to learn more about compensation.