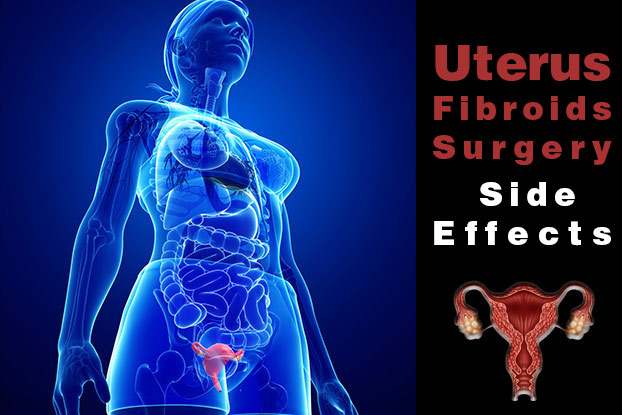 Although generally quite safe, uterus fibroids surgery side effects include excessive bleeding, pelvic pain, discomfort during sex, infection and abscess. Bleeding can persist for weeks or even months after an abdominal surgery such as a myomectomy – which removes the fibroids themselves – or even longer in the case of a hysterectomy – which removes the uterus entirely. A full recovery from a hysterectomy can take up to a year and can be accompanied by heavy bleeding. For premenopausal women who intend to have children, the most serious uterus fibroids surgery side effect is infertility. Loss of fertility can occur even after a successful myomectomy. Complications during a myomectomy, such as uncontrollable blood loss, can make a total hysterectomy necessary.

The risks and long recovery times associated with abdominal fibroid removal surgery led to the development of the less invasive laparoscopic technique, although this option is not suited for all women. Laparoscopic surgery removes fibroids using a long, thin tube called a laparoscope, inserted into the uterus either through small incisions in the abdomen or via the vagina. Not all uterus fibroids can be treated by laparoscopy; however, a hysterectomy may be necessary depending on the size and location of the fibroids.

Laparoscopic power morcellation has the potential to unleash dormant cancer cells present in fibroids. According to an FDA study, about 1 in 350 women who undergo this fibroid surgery risk developing a leiomyosarcoma, which is a cancer of smooth muscle tissue that can spread throughout the body. Once spread, most leiomyosarcomas are inoperable and fatal.

It is clear that this type of fibroid surgery risks cancer. Some doctors and hospitals have already stopped using laparoscopic power morcellation, and patients who developed cancer as a uterus fibroid surgery side effect after undergoing this procedure are preparing lawsuits against the manufacturers of the devices used.