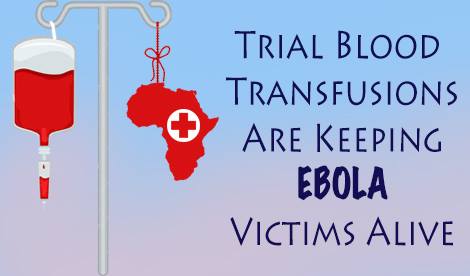 The military hospital in Freetown, Sierra Leone, conducted a controlled clinical trial in which 35 ebola patients received blood transfusions from donors who survived the disease. Though comparisons with the control arm of the study are not currently available, officials reported that 80 percent of the blood recipients lived. In a nation where the survival rate for the disease is below 50 percent, this is absolutely something to cheer about.

Could Antibody Proteins Block the Virus?

Proponents of the blood transfusion tactic believe that antibody proteins, which are slowly produced by the immune system, are most likely responsible for blocking the ebola virus in the weeks following infection. The treatment is particularly promising because blood plasma contains these antibodies. Since plasma can be donated more frequently than blood, this bodes well for patients in need. In addition, the tactic could potentially save more lives because the donated plasma can be stored for long periods of time.

Though the initial findings are very promising, the blood plasma treatments will not have a significant impact in this current outbreak’s death toll, which has climbed past 9,253 individuals. However, these treatments will prove vital for future ebola outbreaks.

Another benefit of the blood treatment is that it is essentially owned by the countries themselves. The medical industries won’t have to endure the headaches that come with paying high prices of buying pharmaceuticals from Big Pharma.

“The countries really liked the blood option more than the drugs because there is no manufacturer behind it and no international regulatory approvals required,” says David Wood, a virologist at the World Health Organization.

Despite the benefits, the blood transfusion tactic is not yet ready to be implemented on a massive scale. At the blood bank headquarters in Freetown, donor blood is stored in a rusted refrigerator, and lab technicians enter vital data on outdated computers. There is also the threat of blood spoiling from unreliable electricity.

Thankfully, the World Bank granted $200,000 to the Sierra Leonean blood trial, and several other donors committed more than $3.3 million to the plasma studies. A portion of this budget will go toward the purchase of medical equipment, refrigerators and infrastructure. Professionals are hopeful that the blood transfusion tactic will one day put an end to the ebola virus for good.