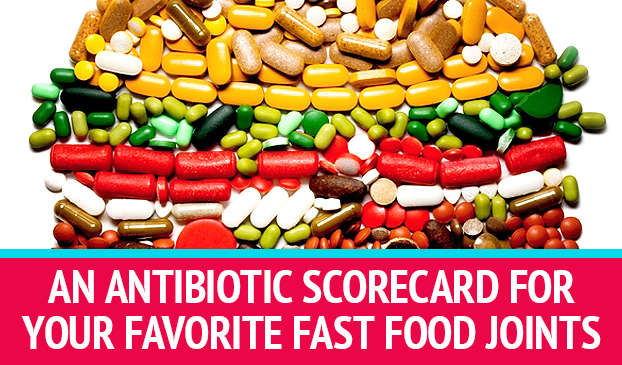 According to the Chain Reaction report, meat sold by major American fast food chains contains an unsafe amount of antibiotics.

The 25 largest fast food chains in the United States are getting schooled — not surprisingly, the report card doesn’t look so good.

The meat sold by the nation’s major fast food providers has been analyzed for its antibiotic content. The scorecard exposes the seriousness of an underreported health issue that affects the nation as a whole.

The scorecard shows that only five American fast food chains received a passing grade, while 20 other restaurants failed the test.

The report grades America’s top restaurant chains on their policies and practices regarding antibiotics in their meat and poultry. Researchers gathered data from restaurants in person, through email and snail mail.

The researchers looked at how well these policies were implemented, including the estimated availability of meat produced without routine antibiotics. The grade also takes into account how transparent the restaurant is about its policies, and if the practices were online.

The grades were calculated based on the establishment’s antibiotics use policies, including the strength of the policy and if it applies to all meat products offered. The total number of possible points was 36.

Each restaurant had a different response of explanation for their good, or not-so-good, grade.

Dunkin’ Donuts and Dominos both said their food complies with all FDA and USDA laws. Wendy’s and Starbucks are working to address concerns about antibiotic use. Burger King plans to review the findings.

Only two restaurants passed with flying colors. Chipotle and Panera Bread both received an “A” score because their meat isn’t treated with antibiotics.

“While many people are just starting to pay attention to the issue, we have known for a long time that it is the right thing to do, and we are pleased to see others taking even small steps to curb antibiotic use in livestock,” Chipotle said in response to the report.

Panera Bread had a similar reaction, claiming that “More than a decade ago, we started serving chicken raised without antibiotics — ahead of the industry. We’re glad to see that others have followed and proud to have extended our commitment to all of the chicken, ham, bacon, sausage and roasted turkey on our salads and sandwiches.”

Chik-fil-a, coming in with a “B” score, is working to catch up to their 2014 claim of ‘No Antibiotics Ever.’ Representatives say that the switch will take time, and that verification from suppliers is of utmost importance. McDonald’s is also working to eliminate some antibiotics in their meat supply.

Papa Johns, which received an “F,” is spending $100 million a year to eliminate artificial ingredients and other additives. “By the first half of 2016, we will offer antibiotic-free chicken on our pizza,” Papa Johns said in response.

The Meaning Behind The Meat

Consuming meat that contains antibiotic-resistant bacteria will make antibiotics ineffective when they are needed most.
Image: Maximized Living

The meat industry uses antibiotics to prevent animals from getting infections that would develop from poor diet and unsanitary conditions. Using antibiotics as a standard preventative method has yielded resistant bacteria, which is then passed on to humans.

“When livestock producers administer antibiotics routinely to their flocks and herds, bacteria can develop resistance, thrive and even spread to our communities, contributing to the larger problem of antibiotic resistance,” according to the report authors.

This is a bigger problem than we think. At least 2 million Americans contract antibiotic-resistant infections every year, the CDC estimates. These infections will kill about 23,000 people.

“The worsening epidemic of resistance means that antibiotics may not work when we need them most: when our kids contract a staph infection (MRSA), or our parents get a life-threatening pneumonia,” according to the study.

In addition, six hormones are used in the industry to promote faster, larger growth of animals. Although the scorecard doesn’t measure the amount of hormones used in fast food meat, the authors want to caution as using them as a replacement for antibiotics.

The report urges restaurants to “use their considerable purchasing power to make meat and poultry produced without the routine use of antibiotics more readily available to consumers.”

The authors also call upon the Food and Drug Administration to mandate greater transparency on antibiotic use in the meat industry, and create “policies that prohibit use of medically important antibiotics for both growth promotion and disease prevention.”

According to the report, it’s really up to the consumer. Recommendations ranging from diners to restaurants, government officials and farmers are included in the report.

“As more consumers demand better meat options, they will become more widely available,” the authors wrote. “Remember: it’s your money, your health and your future.”