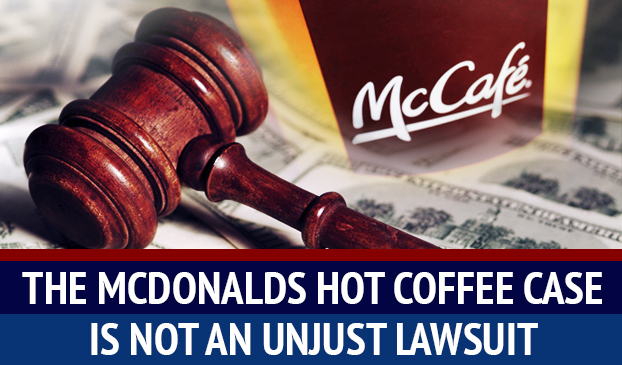 A $3 million award for an elderly woman who sued McDonald’s after spilling hot coffee on her lap has led to a widespread misconception about nonsense lawsuits.

The idea of absurd, unnecessary lawsuits became widespread in the ’90s when 79-year-old Stella Liebeck spilled hot coffee on her lap, sued McDonalds and was initially awarded almost $3 million in damages.

Although most people have heard about the case, few know the real facts. Developing an understanding of what happened and how the case unfolded will help consumers realize the difference between nonsense lawsuits and legitimate causes for legal action.

How The Hot Coffee Case Began

In 1992, Liebeck bought a McDonald’s coffee at a drive-thru in Albuquerque. While sitting in the passenger seat in a parked car in the McDonald’s lot, she attempted to add cream and sugar to her coffee.

Placed between her knees while removing the cup’s lid, the hot liquid covered her lap. The car was not in motion when the the coffee spilled.

The coffee was stifling hot, soaking through her sweatpants and scalding the skin and flesh on her legs, inner thighs, perineum, buttocks, genitals and groin. Liebeck suffered third-degree burns and needed skin grafts on her inner thighs. Over 16 percent of her body was burned.

Her grandson, the driver of the vehicle, took her to the emergency room after she went into shock from the severity of the injury. She was hospitalized for eight days.

Liebeck wasn’t the only one injured by the scalding hot coffee. McDonald’s corporate policy allowed the coffee to be served at 180 and 190 degrees fahrenheit, a temperature that could cause serious burs. Coffee brewed at home is usually between 135 to 140 degrees.

In the legal proceedings, the quality assurance manager at McDonald’s acknowledged that an injury is possible with any substance served at 140 degrees or above, making it more than likely that the coffee would burn the mouth and throat.

The restaurant had received more than 700 previous reports of third-degree burns and other injuries from its coffee. Despite the fact that McDonald’s had already paid injured plaintiffs, the company didn’t alter the standard temperature of their brew.

The Decision To Sue

Liebeck and her family made the decision to sue after McDonald’s refused to pay her medical bills in full.
Image: Liar City

Liebeck reached out to McDonald’s requesting assistance with medical bills, which amounted to over $10,000. Because of the incident, she was permanently disfigured and partially disabled.

She asked for $20,000 to cover her medical expenses and lost income. McDonald’s offered her a maximum of $800, which prompted her to go to trial.

McDonald’s refused to fix the temperature policy despite hundreds of injuries, and the jury awarded Liebeck the money from McDonald’s coffee sales for two days.  The million-dollar amount that Liebeck was initially awarded in punitive damages spread like wildfire throughout media platforms.

Because Liebeck was partially at fault for her injuries, the original award of $2.86 million was reduced by 80 percent, which prompted Liebeck and McDonald’s to come to a confidential settlement in order to avoid the lengthy appeals process.

According to a documentary about the case, called Hot Coffee: Is Justice Being Served?, the facts are as follows:

Jurors commented that the original award was so hefty because McDonald’s had a “callous disregard for the safety of the people.”

Legal action is often more legitimate than you think. Before you assume a case is unwarranted, don’t forget to learn the facts.

How to Outsmart a Burglar and Keep Your Home Safe

What are the Fundamental Differences Between the GOP’s Healthcare Plan and Obamacare?

The Nuclear Reactor That Will Change the World