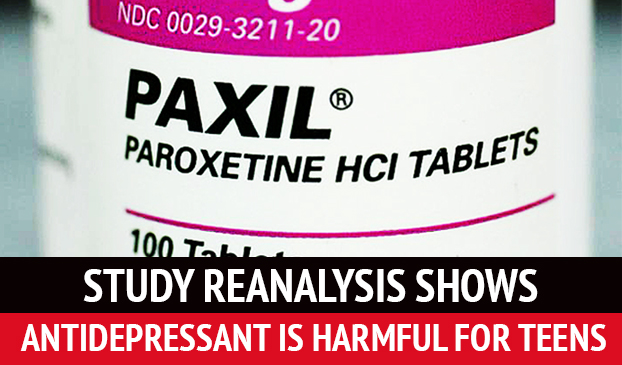 After reevaluating a study that was more than a decade old, researchers discovered the original data backing the use of the antidepressant Paxil in young people was incorrect.

The reanalysis of the 2001 study that led regulators to believe Paxil should be approved for youth has proven the antidepressant is not actually safe and effective for teenagers.

Critics of the original study are using the error to promote a widespread revamping of scientific self-examination and peer reanalysis.

It was later discovered by researchers that Paxil is dangerous for teens and young adults suffering from depression.
Image: Share Care

Dr. Martin Keller of Brown University spearheaded the original study, which included three groups of 90 adolescents throughout eight weeks. One group took Paxil, another took a  placebo and the third group took imipramine, which is an older generic drug for depression.

The group taking Paxil did not outdo the other groups in a standard depression questionnaire, but the drug proved to be more successful in “secondary” measures. Managing certain scales of mood problems was one of the successful areas, the authors reported.

The study was published in the Journal of the American Academy of Child and Adolescent Psychiatry, but many believed that it was unconvincing. Critics who disapproved of the study results said that serious side effects had been played down.

Drug manufacturers began testing antidepressants in young people in the 1990s. These trials are difficult because an estimated one-third of participants is likely to improve on their own. Measuring improvement and labeling side effects are tricky, as each word can play into the perception of a drug.

The 2001 study is part of a long-standing dispute between researchers testing the safety of antidepressants for teens and young adults. In the 2000s, the antidepressant wars subsided with warning labels of Paxil and drugs in its class. The labels included a potential risk of suicide risk for children, adolescents and young adults. However, these drugs are considered safer and more effective for many adults over 25 who have been diagnosed with depression.

The study is still supported by the drug manufacturer GlaxoSmithKline. The drug’s manufacturer submitted the results to federal regulators, who decided that Paxil was going to be approved for use in adolescents.

The manufacturer acted based on scientific conclusions made at the time but is working to incorporate data from the new analysis into the regulation of the drug.

GlaxoSmithKline willingly allowed researchers to access the data, claiming they have engaged in “an unprecedented level of data sharing that speaks to our absolute commitment to transparency.”

Longtime critics of the original study played a role in reanalyzing the data, which took almost a year to complete. The researchers reread summaries, internal trial reports and patient-level data, which included detailed descriptions of how each patient responded to original trials.

In the fourteen years after the study was released, Paxil and other antidepressants have been associated with violence and suicide. But there are no clear statistics depicting this trend.

It is unclear what factors, in conjunction with psychiatric drugs, caused violent reactions, so it’s difficult for health professionals to determine who is at risk.

Dr. Keller and his co-authors disagree with the reassessment of the original study, saying that, “In summary, to describe our trial as ‘misreported’ is pejorative and wrong.”

A New Era Of Reanalysis

The discovery has prompted a discussion on a new trend in scientific publishing that would allow for multiple interpretations in one journal.
Image: Neusentis

The study led to a surge in antidepressants prescribed to adolescents, increasing by 36 percent between 2002 and 2003. It slowed when regulators added black-box warnings to labels.

By reanalyzing a study that is more than a decade old, scientists are starting a new trend that could yield greater scientific confirmations and ease for patients. Experts cite a new era of scientific publishing, which would allow journals to post additional interpretations of the same study.

Scientific self-examination is becoming more common. Retractions are occurring more frequently than ever before, and fraud has shown just how important it is to replicate results. In fact, when researchers analyzed a sample of psychology papers, only half were correct. This means that reexamination is more important than ever.

The authors of the renewed study illustrate that the errors which occurred in the Paxil study are popping up in other areas of research. Their goal is to make the reanalysis available to scientists in clinical medicine to allow for additional perspectives on the results.