Now reading: Cancer Medication Is Grossly Overpriced In The U.S. 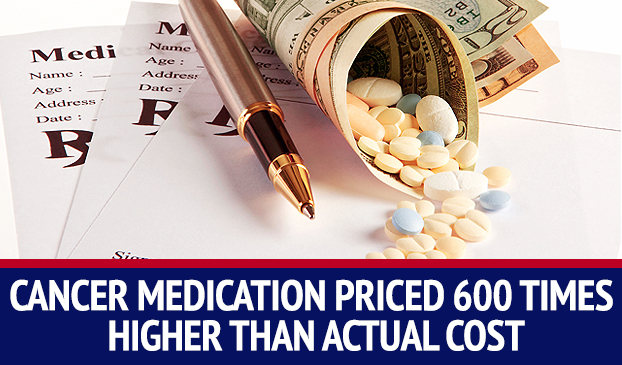 British researchers analyzed data that shed light on the rising cost of cancer drugs in the U.S., which are priced 600 times higher than the actual cost.

The unreasonably high cost of pharmaceuticals in the United States has grabbed attention from politicians, advocates and consumers. Now, research exposing the actual cost of cancer drugs juxtaposed with the price charged by pharmaceutical companies will add further fuel to the fire. The same cancer medications are priced differently all over the world, but these drugs are the most expensive in the U.S.
Image: 123rf

Pharmaceutical companies must pay various costs to bring a drug to market, including funding the active ingredient and other chemicals, developing the combination into a pill, arranging packaging and shipping and budgeting for a profit margin.

British researchers analyzed data that shows five common cancer drugs are priced 600 times higher than they actually cost. The cost of ingredients came from a public database called IndiaInfoDrive. The report is be presented at the European Cancer Conference in Vienna.

“We were quite surprised just how cheap a lot of these cancer drugs really are,” pharmacologist Andrew Hill of the University of Liverpool said. “There’s a lot of scope for prices to come down.”

These drugs treat cancer in the lung, breast, liver, pancreas and thyroid, in addition to leukemia. Tarceva (erlotinib), Nexavar (sorafenib), Tykerb (lapatinib) and Sprycel (dasatinib) cost anywhere from $236 for Tarceva to $4,022 for Tykerb. In the U.S., these drugs are priced at around $78,797 to $135,679.

According to Hill, more than a million cancer patients worldwide would benefit from TKIs but cannot access them because of the hefty price tag.

“Very few of them are being treated now,” he said.

The Preposterous Price Of Cancer Drugs

Health professionals believe that the price of these drugs is not equal to their value.
Image: John Tabita

The price-gouging of cancer drugs has continued to rise overall. Dr. Peter B. Bach of Memorial Sloan Kettering Cancer Center in New York tracked the rise. After adjusting for inflation he found an estimated 100 percent increase since 1965.

“The rate of rise exceeds the rise in benefits from these drugs,” Bach says. “This is a ginned-up pricing structure that isn’t a product of careful analysis. It’s not a bunch of guys in green eye-shades but a bit of dart-throwing and chutzpah. And if there’s a critical Op Ed piece or a Twitter avalanche [in response to a high price] they’ll lower it.”

Three years ago, Bach and two of his peers wrote a New York Times opinion-editorial about the refusal to prescribe a new colon cancer drug at Memorial Sloan Kettering that wasn’t as effective as the high price tag made it seem.

In response to the piece, the drug maker cut the price in half. A similar response from the CEO of Turing Pharmaceuticals occurred after a public outcry caused by the fact that he raised the price of Daraprim from$13.50 to $750-per-pill.

Hope For A Change

Presidential candidates such as Hilary Clinton and Bernie Sanders have both led campaigns that include health care reform.
Image: Southside Pride

While Obama’s administration continues to work on a way to lower the prices of pharmaceuticals nationwide, democratic candidates are attempting to make price-reducing proposals a part of their platform.

“We’ve spoken with Bernie Sanders’ advisers and shown him our results with HIV, hepatitis and cancer drugs,” Hill says.

Because Washington’s pharmaceutical lobbyists are extremely powerful, coming to an agreement on a policy change will be difficult. Pharmaceutical manufacturers argue that regulating prices will limit the likeliness of new drugs being brought to market.

Clinton’s proposal to regulate drug prices “would restrict patients’ access to medicines, result in fewer new treatments for patients, cost countless jobs across the country and could end our nation’s standing as the world leader in biomedical innovation,” according to the Pharmaceutical Research and Manufacturers Association.

The association is not alone. Bach critiques Clinton’s idea that companies should be required to assign a certain proportion of their revenue to research and development.

“Pharma uses the language of a regulated monopoly like utility companies, which argue that they need to be compensated for infrastructure costs,” Bach says. “Apple never says, ‘We charge $600 for an iPhone because of our research.’ Or Ford never says a Taurus costs X dollars because of its R&D.”

In addition, Bach disagrees with the idea that high drug prices are justified if they save patients money on hospitalization or transplants.

“That argument is unique to the pharmaceutical industry,” Bach says. “Can you imagine if Poland Spring priced their bottled water to include the value of avoiding cholera? Or if the price of condoms included the cost of an avoided pregnancy?”