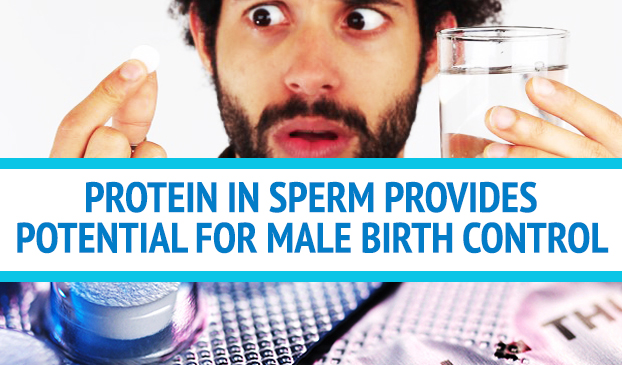 An experiment that measured the fertility of mice isolated a protein in sperm that could become the key to male birth control.

After the gender equality-fueled debate over the controversial women’s libido pill, a new way to medically break traditional gender roles has followed suit. But this time, it’s for men.

An experiment that measured the fertility of mice found a proten in sperm that could be manipulated to act as male birth control.

Proteins in sperm calcineurin were tested in order to understand how they affect fertlity.
Image: Science

Researcher Haruhiko Miyata of Osaka University’s Research Institute for Microbial Diseases conducted an experiment that focused on the fertility of two groups of mice. The study was published in the journal Science.

Anti-rejection drugs Cyclosporine A, known as CsA, and tacrolimus, also called FK506, are used during transplants to prevent the immune system from attacking a newly introduced organ. The drugs block the immune system by inhibiting the calcineurin enzyme that instructs T-cells to attack.

Through experiments with mice, Japanese researchers found a kind of calcineurin that exists in sperm. The pair of proteins inside the calcineurin are called PPP3CC and PPP3R2.

Researchers bred male mice that produced less of the PPP3R2 protein and could not produce   the PPP3CC protein at all. The experiment was meant to help the researchers discern the purpose of the proteins.

The researchers called the scientifically developed mice the “knockout” group. While both groups of male mice had sex with females, the difference between the two is that knockout were unable to impregnate the females.

Researchers concluded the infertility was caused by the lack of the PPP3CC protein. In order to understand how the absence of PPP3CC could cause infertility, the researchers measured the distance the sperm could reach. Although a smaller amount of sperm reached the ovary, it still didn’t explain the infertility.

Even in vitro fertilization couldn’t fertilize an egg covered by the standard layer of cumulus cells. The sperm could make their way through these cells and bind to the egg’s membrane. At the membrane, they’re halted.

The knockout group had sperm that was quick, but not quick enough. Their sperm couldn’t perform hyperactivation, which is a process that uses the whiplike tail to break through the membrane.

Discovering How It Works

After the researchers discontinued the mice’s anti-rejection drug use, their fertility returned after one week.
Image: Acupuncture Monterey Bay

The knockout sperm moved at the same frequency as the regular sperm, but the head to tail connection was too rigid. This caused the cell to be inflexible, which is the reason why it couldn’t penetrate the egg’s membrane.

In another round of in vitro fertilization, the researchers removed the membrane and found that the knockout sperm was able to fertilize the egg and impregnate the female mouse.

The drug was given to regular mice who possessed a combination of mature sperm cells and new cells that have yet to develop. The immunosuppressant didn’t affect the flexibility of the mature cells.

The male mice that were given CsA or FK506 for two weeks became infertile because the linking part of the sperm had become rigid. The protein FK506 caused infertility in four days, whereas CsA took five days.

The most astonishing part of the experiment was after the drug use was stopped, the mice’s fertility returned after one week.

“Considering these results in mice, sperm calcineurin may be a target for reversible and rapidly acting human male contraceptives,” the researchers concluded.