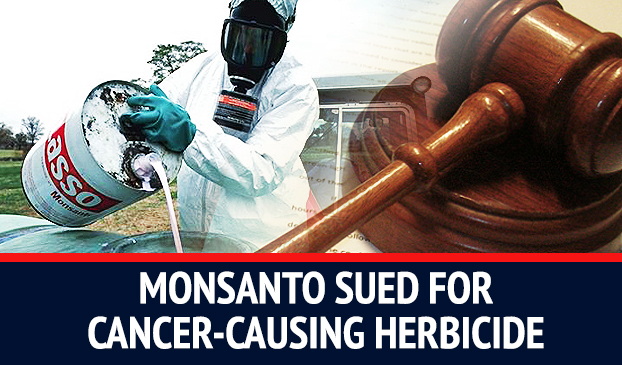 Monsanto is currently being sued by two workers who developed cancer after being exposed to the herbicide chemical Roundup.

Monsanto is famous for its bad reputation, but it seems that the consequences of the company’s actions are finally catching up.

Two individuals exposed to Monsanto’s herbicide Roundup are suing the multinational agrochemical and agricultural biotechnology corporation for causing their cancer.

Monsanto’s underhanded tactics have been widely protested. The lawsuits claim that Monsanto hid the dangerous effects of its herbicide Roundup.
Image: Common Dreams

The lawsuits were seperately filed by a farmer and a horticultural assistant who both developed cancer after coming into contact with Monsanto’s herbicide.

On top of that, the plaintiffs claim that Monsanto attempted to cover up the risks of working with the Roundup chemical in order to trick regulators into approving its use.

Enrique Rubio is a 58-year-old farm worker who labored in California, Texas and Oregon. He toiled cucumbers, onions and other vegetable crops. Rubio was given the task of spraying fields with Roundup and other pesticides.

He was diagnosed with bone cancer in 1995. On Sept. 22, he filed for legal action in a U.S. District Court in Los Angeles.

Judi Fitzgerald is a 64-year-old horticultural assistant who worked at a horticultural products company in the ’90s where she was exposed to Roundup.

Fitzgerald filed a New York suit on the same day as Rubio. She was diagnosed with leukemia in 2012.

A Predicted Increase In Lawsuits

Roundup is a weed killer with an active chemical called glyphosate. The World Health Organization (WHO) recently categorized glyphosate as “probably carcinogenic to humans.”

Now that the WHO has publicly outed the cancer-causing effects of Roundup, attorneys expect more people to come forward and take legal action against Monsanto.

“I believe there will be hundreds of lawsuits brought over time,” attorney Robin Greenwald said.

According to Charla Lord, a Monsanto spokeswoman, Glyphosate is safe if used as intended.

“Decades of experience within agriculture and regulatory reviews using the most extensive worldwide human health databases ever compiled on an agricultural product contradict the claims in the suit which will be vigorously defended,” she said.

Attorneys will argue that Roundup is “unreasonably dangerous” to consumers and that the company willingly hid or ignored the carcinogenic risks associated with glyphosate.

According to the lawsuits, the Environmental Protection Agency changed glyphosate from “possibly carcinogenic to humans” to “evidence of non-carcinogenicity in humans” after being pressured by Monsanto.

However, the WHO cites studies that link glyphosate to cancer despite disagreements from Monsanto. Lawyers will continue to support plaintiffs in class-action lawsuits for the cancer-causing effects of glyphosate.