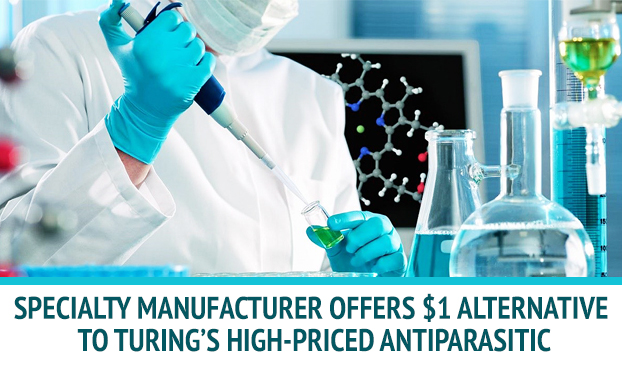 A specialty drug company called Imprimis Pharmaceuticals has responded to the price-gouging of Daraprim by creating a cheaper alternative.

Turing Pharmaceuticals purchased the rights to the parasite-fighting drug Daraprim in August and raised the price to $750 per pill. Both media and medicine were outraged, sparking a full-on protest that condemned the company’s CEO Martin Shkreli.

A Comparable Product With Added Benefits

The compound created by Imprimis Pharmaceuticals has added benefits that will blow Daraprim out of the spotlight.
Image: Hispanics News Network

Daraprim, also known by its generic name pyrimethamine, has existed since 1953. It is used to treat parasitic infections that prey on patients with weakened immune systems, such as those with cancer and HIV/AIDS. These patients are more likely to develop a condition called toxoplasmosis, which causes muscle pain, fever and headaches.

Imprimis Pharmaceuticals, located in San Diego, plans to make a comparable version of the medication for $1 a pill. That’s $749 less than Turing planned to charge. The alternative version would also include a chemical called leucovorin.

“According to the Centers for Disease Control and Prevention, pyrimethamine works to block folic acid synthesis in the parasite T. gondii, the cause of toxoplasmosis, and leucovorin helps to reverse the negative effects on bone marrow caused by this mechanism of action,” the company said.

The drug has changed hands a number of times. Daraprim was originally manufactured by GlaxoSmithKline for about $1 a tablet, and then Impax Laboratories for $13.50 a tablet. Turing bought the drug in August for $55 million and raised the price to $750 per pill.

However, the most recent version of the drug has added benefits from the leucovorin. This version will be sold at a price that is closer to the original cost.

“Imprimis is now offering customizable compounded formulations of pyrimethamine and leucovorin in oral capsules starting as low as $99.00 for a 100 count bottle, or at a cost of under a dollar per capsule. Compounded medications may be appropriate for prescription when a commercially-available medicine does not meet the specific needs of a patient,” the company said.

It seems likely that there won’t be much competition when deciding where to purchase the antiparasitic compound.

If Turing were to monopolize the drug, it would cost about $336,000 a year to treat someone with toxoplasmosis, according to the Infectious Diseases Society of America and the HIV Medicine Association.

“While we respect Turing’s right to charge patients and insurance companies whatever it believes is appropriate, there may be more cost-effective compounded options for medications, such as Daraprim, for patients, physicians, insurance companies and pharmacy benefit managers to consider,” Imprimis CEO Mark Baum said in a statement.

“This is not the first time a sole supply generic drug — especially one that has been approved for use as long as Daraprim — has had its price increased suddenly and to a level that may make it unaffordable,” Baum said.

“In response to this recent case and others that we will soon identify, Imprimis is forming a new program called Imprimis Cares which is aligned to our corporate mission of making novel and customizable medicines available to physicians and patients today at accessible prices,” Baum said.