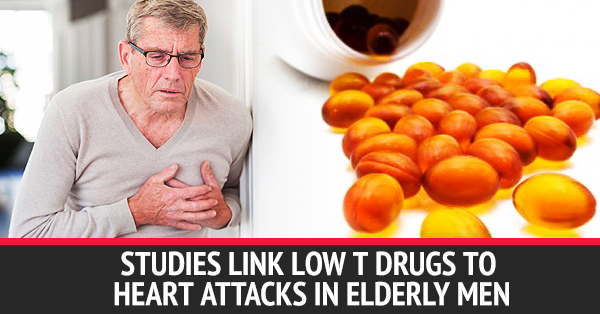 In the past few years, a number of medical journals have published studies linking prescription testosterone to increased cardiac risks.

Testosterone therapy, a popular hormone treatment for males, has been linked to heart attacks, strokes, prostate cancer and other serious conditions.

While testosterone medication is used by different age groups and demographics, researchers have found that it can increase the risk of cardiac issues in elderly men.

PLoS One Study Published in 2014

PLoS was founded in 2000 as a nonprofit, open-access scientific publishing project.
Image: WikiMedia

Public Library of Science, a peer-reviewed resource that includes various scientific disciplines, published a study evaluating the hypotheses that testosterone therapy can increase the risk of heart attacks, referred to as “acute non-fatal myocardial infarction.”

The Univeristy of California Los Angeles and the National Cancer Institute tested a database of 56,000 patients, measuring the likelihood of heart attack both before and after using testosterone for the first time.

Published on January 29, 2014, the study’s scientists concluded that men older than 65 and younger men with undiagnosed heart disease had double the risk of suffering a heart attack after the first 90 days of testosterone therapy.

The most recent study builds on other research that has identified cardiac risks caused by testosterone replacement.

The Journal of American Medicine (JAMA) published a 2013 study that examined 8,709 veterans with low testosterone levels.

The men underwent cardiac tests and were entered into the Veterans Affairs (VA) system between 2005 and 2011.

“Among a cohort of men in the VA health care system who underwent coronary angiography and had a low serum testosterone level, the use of testosterone therapy was associated with increased risk of adverse outcomes,” according to the study.

Testosterone therapy bumped the risk of death, heart attack and stroke by an estimated 30 percent in veterans with a history of heart disease.

The New England Journal of Medicine is published by the Massachusetts Medical Society and has existed since 1812.
Image: Oh Care

In 2010, the New England Journal of Medicine (NEJM) conducted a similar study. In this experiment, a man lost his life. The cause of death was thought to be a heart attack activated by testosterone use.

The trial, called Testosterone in Older Men with Mobility Limitations (TOM), evaluated frail men with a high prevalence of cardiovascular diseases. The study was stopped because of a high number of negative cardiovascular events in the treatment group.

The study also found that testosterone gels increased the risk of stroke, or cerebrovascular accident (CVA).

As men age, testosterone levels gradually decline about 1 percent each year after age 30 or 40.
Image: Visualize Us

Older men are more likely to use testosterone replacements to improve sexual function, bone density, and strength that is affected by the natural aging process.

But the truth is that the effects of testosterone therapy on the cardiovascular health of men are unknown.

While scientists conduct research to gain more knowledge about prescription testosterone, millions of men continue using it every day.

Patients who experienced heart complications from testosterone medication may be eligible for compensation. Complete a free, no-obligation survey to learn more.