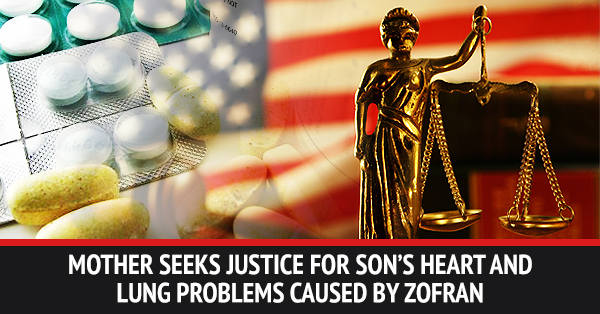 During the early stages of her pregnancy, Blumenthal began using a generic version of the off-label morning sickness drug Zofran in 2014.

On January 2, 2015, her son was born with multiple heart defects, a lung defect and an intestinal issue. In addition to developing a program to support others dealing with similar circumstances, Blumenthal has filed a suit to fight against the drug that changed her family forever.

Blumenthal’s son suffers from atrioventricular canal defect, which caused holes to develop in the center of his heart.
Image: Hx Benefit

Although doctors believed he wouldn’t make it through the pregnancy, Blumenthal’s son pushed through. However, she knew his life wouldn’t be easy. Originally planning to name him Landon, Blumenthal decided to change his name to Finley, meaning “warrior.”

Blumenthal’s son came into the world with a list of congenital problems, but the most severe is called atrioventricular canal defect. The diagnosis means that Finn has a hole in the center of his heart.

The condition affects the natural regulation blood flow and requires costly open heart surgeries. If untreated, the condition can cause serious complications including enlargement of the heart, heart failure, pulmonary hypertension, and pneumonia. Finn had open heart surgery before his first birthday.

Additionally, Finn has a double outlet right ventricle defect. The condition involves a difference in the structure of the heart, causing the two main arteries to connect to only the right chamber rather than both pumping chambers.

Blumenthal’s 1-year-old boy also suffers from  heterotaxy of the lungs, which is a misalignment of these essential organs in the chest. Finn’s lung has been deteriorating, and his mother needs to constantly monitor his blood oxygen levels. The heterotaxy is likely also linked to Finn’s malrotation of the intestines, in which his small bowel is found on the right side of the abdomen.

Supporting Others And Fighting The Industry 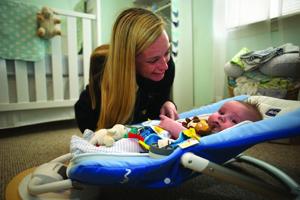 In addition to pursuing legal assistance to get compensation for Finn’s medical expenses, Blumenthal created a support group for families with sick children.
Image: Fredericksburg

There is no doubt that Blumenthal’s heart was broken when she discovered her son suffered from so many medical problems.  Finn’s short life has been filled with expensive surgeries, endless tubes, heavy oxygen tanks and long nights in the hospital.

Through a Facebook page called Prayers for Finn, Blumenthal has created a community of over 26,000 members that offers mutual support and comforting donations to families with sick children. It has been instrumental in helping her get through the surgeries.

On September 28, 2015, Blumenthal took another action. She decided to fight against the drug that allegedly caused her son’s medical issues. She named Glenmark Generics Inc., USA and GlaxoSmithKline LLC in her complaint, taking on both companies that may have had a hand in causing her son’s condition.

But Blumenthal is not alone. Hundreds of lawsuits have been filed against the manufacturer of Zofran, with about 200 cases consolidated in a multi-district litigation in Boston.

If you took Zofran while pregnant and if your child was born with birth defects, then you might be entitled to compensation. Complete a free, no obligation case evaluation now to see if you qualify.