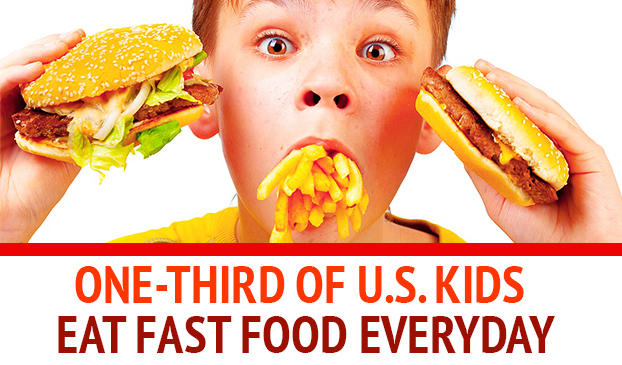 The Centers for Disease Control and Prevention released a new study that found one-third of U.S. children eat fast food every day.

Since the 1990s, about one-third of U.S. kids eat fast food every day. Despite increased governmental efforts to promote healthy eating habits, not much has changed.

A new report from the Centers for Disease Control and Prevention shows that there has been no change in levels of fast food consumption or in the amount of calories gained from a fast food diet.

Almost 35 percent of U.S. children consume fast food on any given day, according to the CDC.
Image: CDC

The study, conducted by the CDC, included 3,100 children ages 2 through 19. Researchers asked the children or their parents about the food they ate in the past 24 hours. The survey was done in 2011 and 2012.

The findings show that some people never eat fast food, while others eat it every day. Adolescents ages 12 to 19 are more likely to eat fast food than children ages 2 to 9.

Although calorie totals weren’t included, kids consume about 1,900 calories a day. About 245 calories are from fast food, which is the equivalent of a basic McDonald’s hamburger.

“Previous studies have reported that acculturation to the U.S. lifestyle plays an important role in the adoption of unhealthy behaviors, such as fast food consumption, in Asian-American and other immigrant groups,” according to the study.

Effects Of A Fast Food Diet Children eating fast food every day will be getting an increased amount of calories, which leads to high body mass index and obesity.
Image: Guardian

Fast food is calorie-heavy, contributing to an obese and overweight population. Drive-thru french fries and takeout pizza are causing a national health concern. Obesity has been stable at about 17 percent over the last decade.

“This analysis found no significant differences in fast food consumption by poverty status or weight status among children and adolescents,” according to the study.

“At least we’re not seeing it go up,” said Cheryl Fryar, a study author.