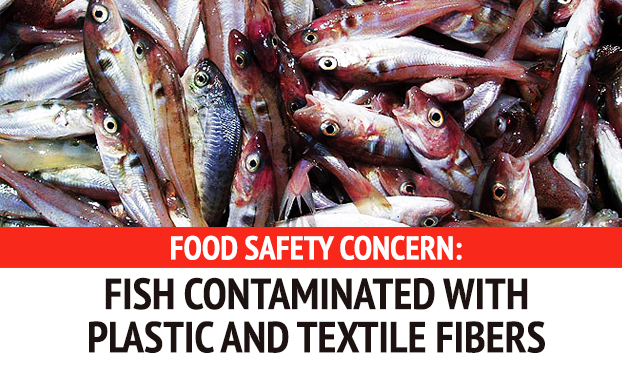 Researchers sampled over 70 seafood species in Pacific waters and discovered the presence of plastic and textile contaminants.

An investigation into the quality of fish in California and Indonesia has shown that prominent species in the seafood chain are contaminated with plastic and textile fibers. The study was able to discern the kinds of contaminants prominent in fish caught in different coasts along the Pacific Ocean.
Image: Vegan-Magazine

Researchers led by Chelsea Rochman at the University of California-Davis School of Veterinary Medicine sampled a variety of fish species in Half Moon Bay and Princeton, California and in Makassar, Indonesia.

The California sample included 76 fish from 12 species along with one species of shellfish. In Indonesia, the researchers sampled 76 fish from 11 species. The fish were caught by regular fisherman in local waters.

Researchers dissected the fish species and analyzed the contents of their guts. The process of chemically dissolving tissue allowed them to uncover plastic and fiber debris inside the fish.

In the Indonesian sample, 55 percent of fish possessed human-derived debris, including Indian mackerel, shortfin scad and silver-stripe round herring. Of the fish sampled, 28 percent contained debris.

One fish had a total of 21 pieces of plastic in its guts, as plastic debris were most prominent in Indonesia’s fish.

In the sample taken in California, 67 percent of species had debris, including the pacific oyster, pacific anchovy, striped bass and Chinook salmon. About 25 percent of the fish sampled were affected.

Researchers noted a difference between the kinds of debris in each location, with American fish posessing mostly textiles pollutants compared to the plastic pollutants dominating Indonesian waters.

“I was very surprised to see such a difference in type of debris between locations,” Rochman said.

Each country has a different system used to dispose of waste. Researchers believe that these systems illustrate why fish species in certain areas contain different contaminants.

In Indonesia, the waste management system allows plastics to be thrown into the ocean. The United States has implemented a plastic recycling initiative, which accounts for the lack of plastic debris.

Fish near the California coast contain high levels of textile fibers, which could be attributed to the prevalence of washing machines. The discharge from washing machines is sent to wastewater treatment plants, where it could easily seep into the ocean.

“Fibres are a ubiquitous contaminant in the effluent from wastewater treatment plants due to their small size and abundance in the waste stream. They have been found in several marine habitats and animals,” Rochman said.

Consumption of textile and plastic fibers can cause a number of health concerns, but the extent remains unclear until more research is conducted. Rochman urges policymakers and citizens to protect the oceans in order to keep the problem from worsening.